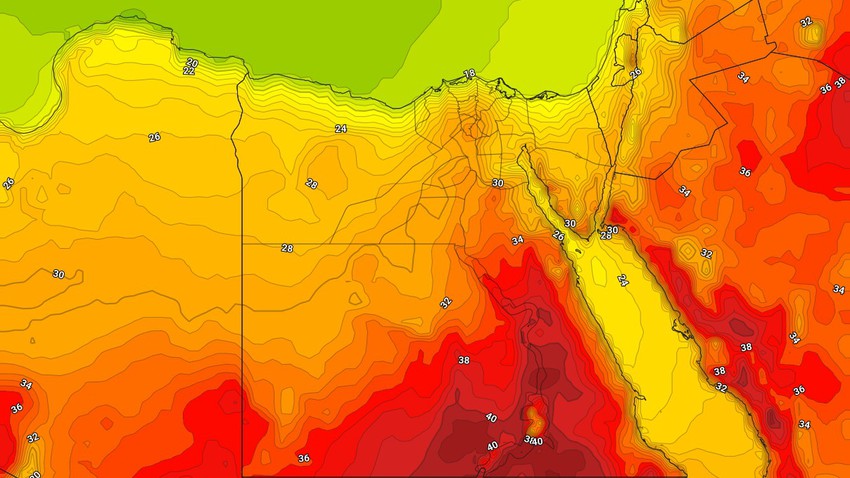 Arab Weather - There is a further drop in temperatures on Wednesday, and gentle weather prevails on the shores of the Mediterranean, and is relatively warm to hot in the northern and western regions, while it continues to be hot to very hot in the southern and eastern parts, and clouds appear at different altitudes with continuing opportunities for precipitation. Thunderstorms in narrow and random geographical ranges are concentrated in the southeast regions, and thunder clouds are associated with the activity of the winds within their range of influence.

The winds will be northwesterly moderate, accompanied by active to strong gusts in some areas, and they work to raise dirt, dust and wave height in the shores of the Red Sea and the Gulf of Aqaba.

The weather is cooler than usual at night

An additional drop in night temperatures occurs, and the weather is warm in the southern regions and parts of the eastern regions, and relatively cold in the late night over the rest of the regions, and clouds continue to appear at different heights with the chances of thunderstorms remaining in narrow and random geographical ranges concentrated in regions. In the southeast, thunder clouds are associated with wind activity in their range of influence.

The winds will be northeasterly to northeasterly moderate in speed, sometimes active and lead to dust and high waves in the shores of the Red Sea and the Gulf of Aqaba.

Pictures | What are the cities of Palestine?