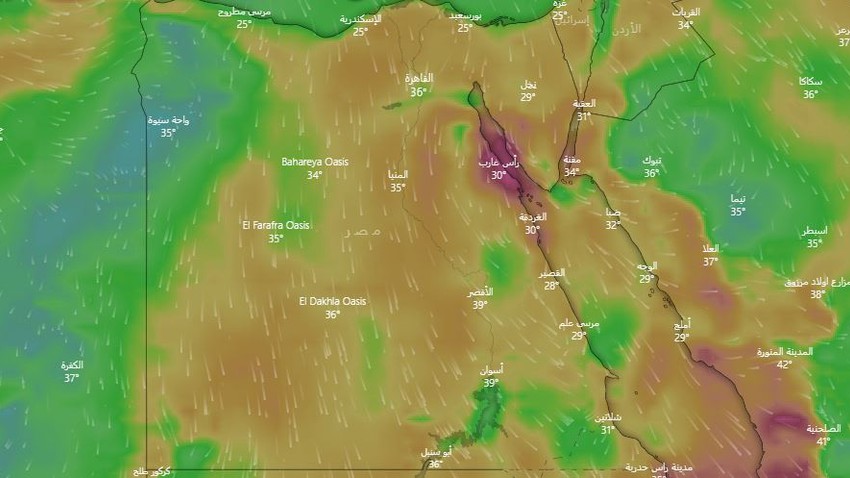 Weather of Arabia - Temperatures tend to rise slightly during the weekend, so that normal summer weather prevails in all cities and governorates of Egypt, so that the temperatures are around their monthly rates following an extension of an upper air depression centered over Turkish lands.

Normal summer weather for the weekend

There will be a slight decrease in temperatures on Friday and Saturday, so the weather will be relatively hot on the northern coasts and central Sinai, hot on the Delta, Greater Cairo, the Canal cities, Lower Egypt and northern Upper Egypt, and very hot on the rest of the regions, and winds are north to northwest, moderate in speed, sometimes active in the afternoon hours. And it raises dust and dust in parts of northern Upper Egypt and Lower Egypt. It is also associated with strong flashes sometimes on the Gulf of Suez, which raises local dust storms in the cities of the Gulf of Suez, and the conditions are not suitable for marine navigation. During the night hours, the weather is pleasant in the northern regions and mild in the rest of the regions, and humidity levels rise and water mist is formed in parts of Sinai, the Canal cities and parts of Lower Egypt.

Egypt will continue to be affected by an extension of an upper air depression accompanied by an air mass around its normal rates at the beginning of next week, so that temperatures will remain around their relative rates for this time of the year in most areas , so that the weather will be moderate on the northern coasts and hot on the delta, Cairo, canal cities, central and southern Sinai and the coasts of the Red Sea And north of Upper Egypt and very hot in the rest of the regions, while the weather is moderate to mild at night in most regions.