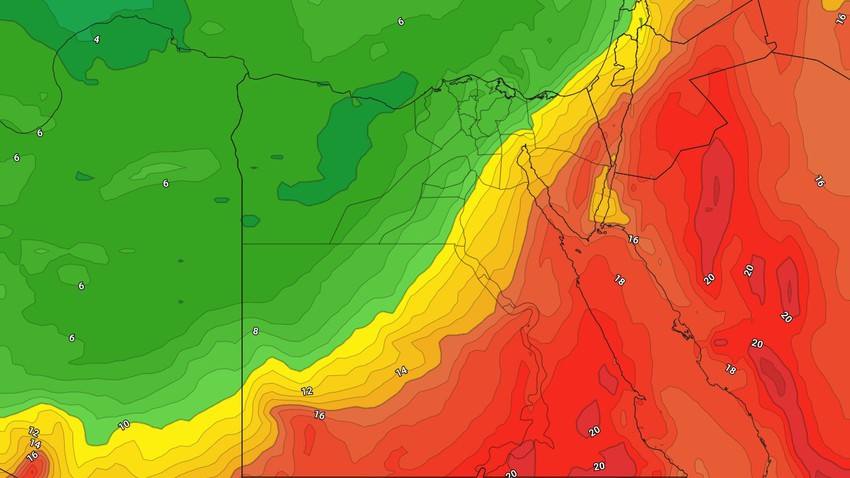 Arab Weather - An air depression approaches the eastern Mediterranean on Sunday, pushing in front of it a warm air mass towards all regions of Egypt on Sunday, as temperatures rise significantly and significantly, and warm weather prevails in most regions, and temperatures are higher than their averages for this time of year .

The southwestern wind turbine is active on Monday as the horizontal visibility is greatly reduced throughout the west of the country, provided that these dust storms move east towards Cairo at noon and afternoon Monday, and these dust storms are accompanied by strong winds that touch 70 km / hour, especially in the western desert areas Convertibles.

Low weather and rain on the northern coast from Monday evening

The depression advances further towards northern Egypt on Tuesday evening, as the chances of rain begin on the coasts of Marsa Matrouh and all the coasts of the northwest of the country, provided that the areas covered by rain expand on Tuesday to include all of the northern coast, including the city of Alexandria, and this rain is sometimes accompanied by thunder and falling beads the cold.

A sharp drop in temperatures Monday

On Monday and Tuesday , the cold air mass accompanying the depression begins to cross the air of the republic, where temperatures decrease significantly and significantly after the rise that it witnessed on Sunday, and a relatively cold atmosphere prevails during the day throughout the north and center of the country, while at night a cold weather prevails, and the temperatures are Below their averages for this time of year by about 6-8 ° C.