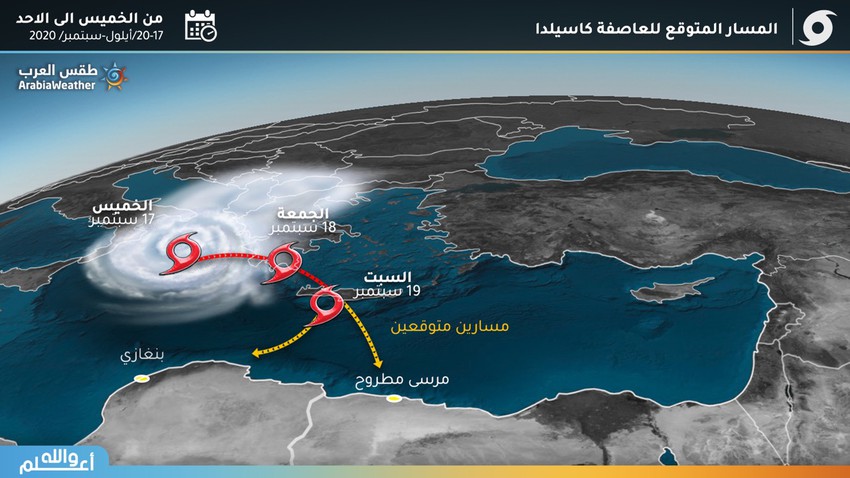 Arab Weather - The storm Castilda was formed on Tuesday off the Libyan coast, after it was a strong air instability that brought large amounts of rain on the coasts of northwestern Libya, and the center of the storm began to move north over the waters of the central Mediterranean to reach Greece on Thursday, in conjunction with the intensification of Storm force.

The effects of the storm Castilda on Greece are expected to continue until Saturday, bringing with it high winds and heavy rains throughout southern Greece, including the capital, Athens.

What are the possible paths of the storm after Greece?

There are two possible paths, the first and the most likely, for the storm to move south on Sunday to hit the west of the island of Crete and then return to the waters of the central Mediterranean on its way towards the coasts of eastern Libya and northwestern Egypt on Monday, with its intensity rapidly declining to become a shallow air depression when it reaches the coasts of eastern Libya And northwestern Egypt, but it brings thunder showers to those areas, including the city of Marsa Matrouh.

As for the second track, it does not differ much from the first track, except that the storm will take a more westerly course, as during the storm's movement south on Sunday, its effects will include the Libyan city of Benghazi, and the opportunity for the coasts of northwestern Egypt, including the city of Marsa Matruh, will continue to be affected by rain on Monday as a result of the remnants of the storm in Its way of ebb and flow.

The third and least likely path is the disappearance of the storm over the waters of the Mediterranean on Monday, without any impacts on Libya or Egypt.