Egypt | The effect of the heat wave intensified, coinciding with chances of thunderstorms in the south of the Republic, starting from Thursday 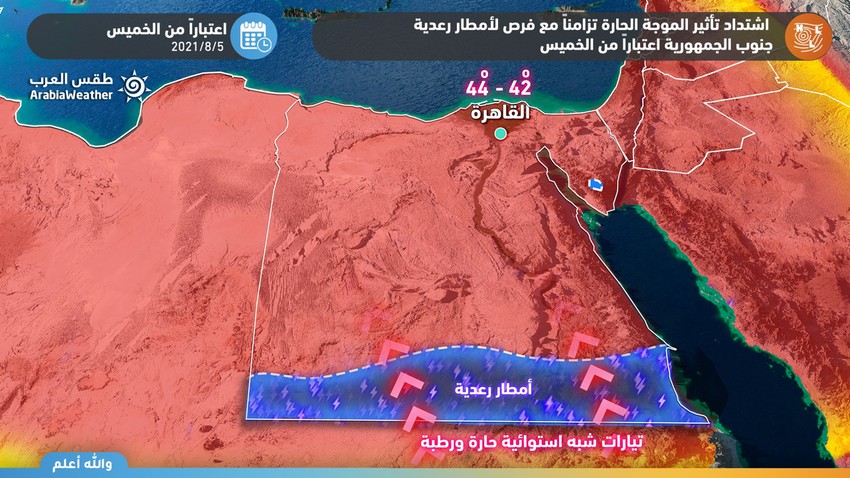 Weather of Arabia - The Republic of Egypt has been affected for days by a rush of very hot air currents coming from the Arabian Peninsula and others coming from Sudanese lands, which has raised temperatures to forty levels in all regions, as the capital Cairo recorded on Monday and Tuesday approximately 40 degrees Celsius.

The heat wave intensified and rain is present in the south

In the details, it is expected that the effect of the heat wave on the Republic of Egypt will deepen in the coming days, following the flow of more hot air currents in the layers of the atmosphere near the surface of the earth and coming from both the Arabian Peninsula and the Sudanese lands, so that very hot weather will prevail, especially in the afternoon and afternoon hours in most areas. Temperatures will be around 43 degrees Celsius in many Egyptian villages and cities, including the capital , Cairo, and very hot weather throughout the day in the southern regions. As for the coastal areas, it is expected to live both, as they are usually immune to heat waves due to less wind flow. Heat from over the sea to the land, but in conjunction with the rise in temperature, the humidity levels rise, which increases the sensation of heat significantly. 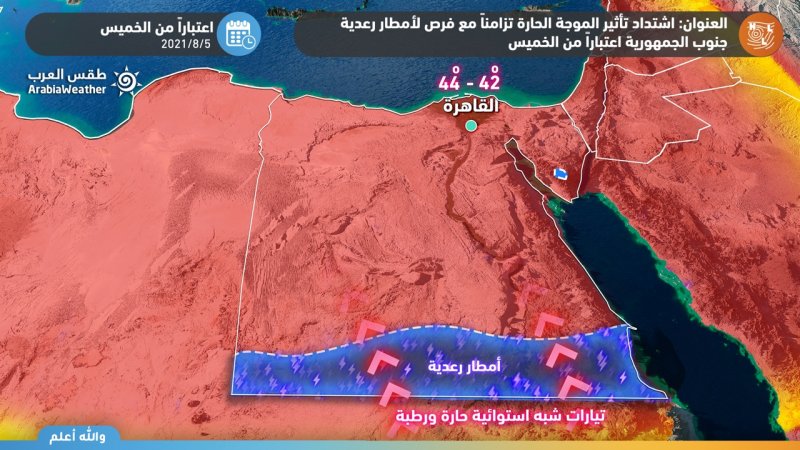 This weather system coincides with a rush of semi-tropical air currents in the middle and high layers of the atmosphere, which will multiply clouds and clouds after Thursday afternoon and evening and thunderstorms in parts of the far southern regions of Egypt, while the rain is expected to expand in the afternoon and evening of Friday and Saturday to include rain large parts of the southern coastal areas , including Halayib and Shalateen and Marsa Alam, and extends the southern interior areas to include parts of Aswan , especially the southern parts of them.

These thunderstorms are characterized as random in nature, but they are heavy at times and cause the flow of valleys and form torrents in a way that may be dangerous at times, in addition to that they are often preceded by a great activity in wind speed that may cause the formation of local dust waves.

The scientific reason for the rainy state

Tropical separator rushes to the north of Sudanese territory

The rainy situation comes as a result of the rush of the tropical separator or what is known as the ITCZ ​​to the north of Sudanese territory, as with the beginning of the summer in the northern hemisphere, the trade winds move northward and take a path in the form of an eastern zigzag line, carrying with it large amounts of moisture from the tropics in the north towards areas The average solar radiation is high, which creates a fertile area for the formation of cumulus clouds that cause thunderstorms.

According to the outputs of the numerical models operated by the Arab Weather website, the orbital separator will continue to move north in the coming days to take its location near the north of Sudanese lands, which stimulates the rush of sub-tropical air currents towards the southern parts of the republic to intensify cumulus clouds on a daily basis in the southern parts, especially far away. The afternoon and evening hours, God willing.