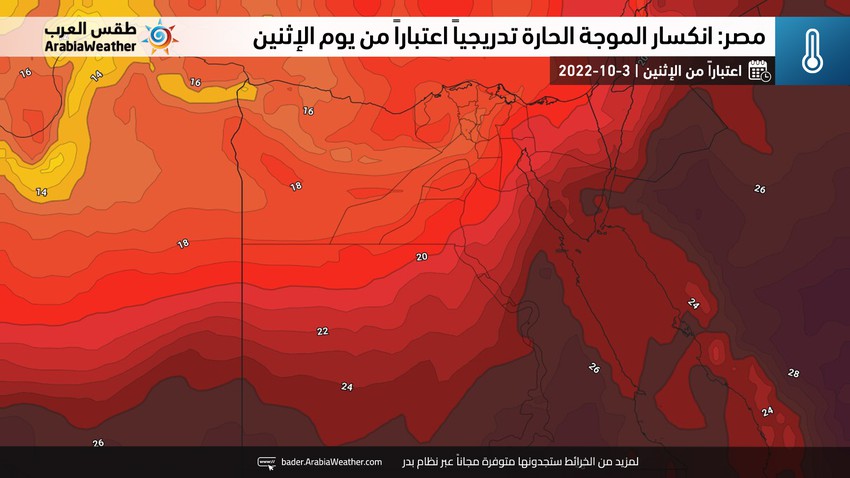 Arab Weather - The air maps operating in the "Arab Weather" center show expectations that the country will continue to be affected on Sunday by the hot air mass that causes the heat wave, so that the atmosphere remains very hot in most parts. It is expected that the heat wave will break from Monday, so that there will be a significant decrease in temperatures, and the temperature will continue to decrease during the week, God willing.

The heat wave will continue to affect the country on Sunday

In the details, the temperatures continue to be higher than their averages for this time of the year by about 5-7 degrees Celsius on Sunday, and the weather is hot and humid on the northern coast and hot on the northern regions, all the way to Greater Cairo. The temperature is 40 degrees Celsius, while it is very hot in the rest of the regions, including the Upper Egypt regions, all hours of the day, and the winds are northwesterly moderate in speed, active at times and causing dust and dust in many areas, especially desert roads and open areas of Upper Egypt.

The scientific reason, for Egypt to be affected by the heat wave despite the advent of autumn, is the result of the continued flow of cold air from western Europe to northwest Africa (the Maghreb), and this results in the continued intensification of the air altitude in all layers of the atmosphere and the hot air mass accompanying it over the countries Levant and Egypt, where these weather elements will keep the hot weather in the country on Sunday.

The heat wave recedes and the temperature drops from Monday

A lower temperature air mass is located in the eastern basin of the Mediterranean Sea, to activate an accompanying northwestern marine current, which is reliable, God willing, to reduce temperatures on Monday in most regions of Egypt, but it remains higher than its general rates by 2-3 degrees Celsius, with In general, the weather remains hot in most areas.