Egypt | Very hot weather in most areas of the republic, and rising dust in some areas next week 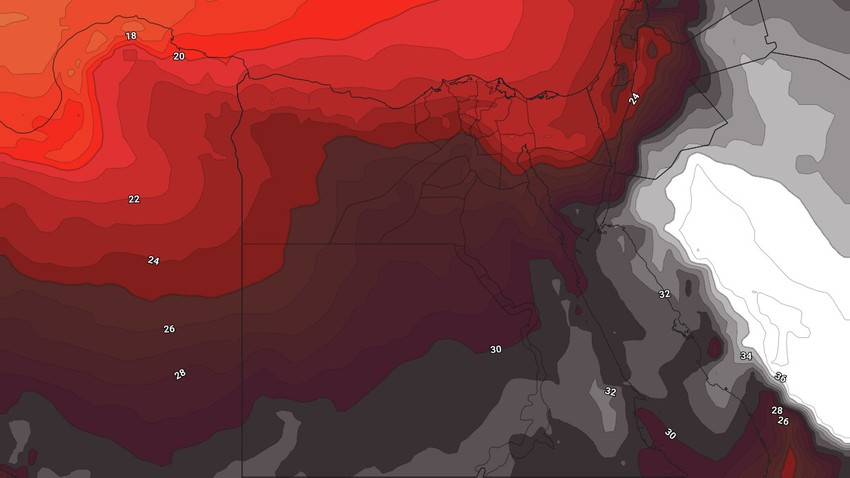 Arab weather - It is expected that Egypt will continue to be affected by a hot air mass coming from the desert of the Arabian Peninsula, coinciding with the control of an air rise in the upper layers of the atmosphere, so that hot to very hot summer weather and temperatures higher than their natural rates during, and winds are active in parts of the Republic Egypt is exciting to dust and dust in some areas.

Very hot weather in most areas

In the details, the subtropical air altitude continues to extend over all parts of the Republic, to be higher than its normal rates for this time of the year by 4-6 degrees Celsius, so that relatively hot weather prevails on the northern coasts and hot to very hot over Cairo and the general Lower and North regions. Upper Egypt and South Sinai, while it is very hot over the rest of the regions, exceeding the forties of degrees Celsius in the southern parts.

During the night hours, the weather is warm in the northern regions and relatively hot in the rest of the regions, and the relative humidity increases in the night and early morning hours on some coastal and inland areas, and it is possible that the daily fog will form on a daily basis in different regions of the north of the Republic, which may extend to a limited extent for some coastal areas.

In conjunction with this atmosphere, the northern winds are active on a daily basis in parts of Egypt, and they are dusty and dusty at times, and the opportunity is generally weak for local showers of rain in the far south of the Republic.

The Arab Weather team has created a detailed bulletin for the Republic of Egypt that includes forecasts for the next five days, updated on a daily basis, all you have to do is click here.