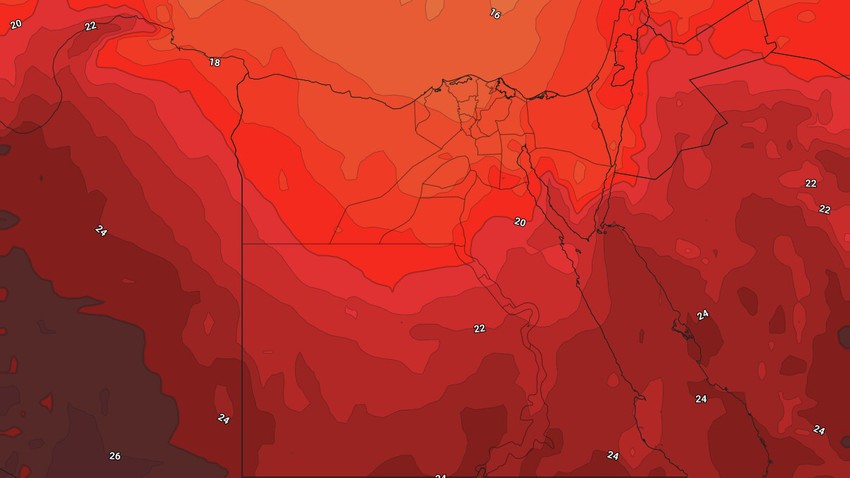 Arab Weather - There is a rise in temperatures on Friday, to be slightly higher than their usual rates for this time of the year, and the weather is warm to relatively hot in the northern and central regions, and hot in the southern and eastern regions, with clouds dispersing at different heights, and the winds will be northerly Eastern moderate speed, sometimes active and exciting dust and dust, and northward moderate to active speed on the Gulf of Suez and the Gulf of Aqaba.

The weather will also be relatively cold during night hours over the northern regions, and mild to moderate in the rest of the regions, with a significant increase in humidity levels in the northern regions, which will work to form dense fog in the far north of the country and warn of the lack of horizontal visibility in some areas. Including Alexandria, the winds will be northwesterly to light northeasterly to moderate speed, sometimes active in some areas, and they are northwesterly active in speed and accompanied by strong gusts on the Gulf of Suez.

An additional rise in temperatures on Saturday

A further rise in temperatures occurs on Saturday, and the weather is moderate in the shores of the Mediterranean, and relatively hot to hot in the rest of the regions, especially the southern ones, with the continued appearance of clouds at different heights, and the winds are fluctuating in direction and light to moderate speed, sometimes active in some Areas including the Gulf of Suez.

Also, there is an increase in nighttime temperatures compared to the previous nights, and the weather turns to be pleasant in general, and the winds are fluctuating and light to moderate in speed, sometimes active in some areas, including the Gulf of Suez.