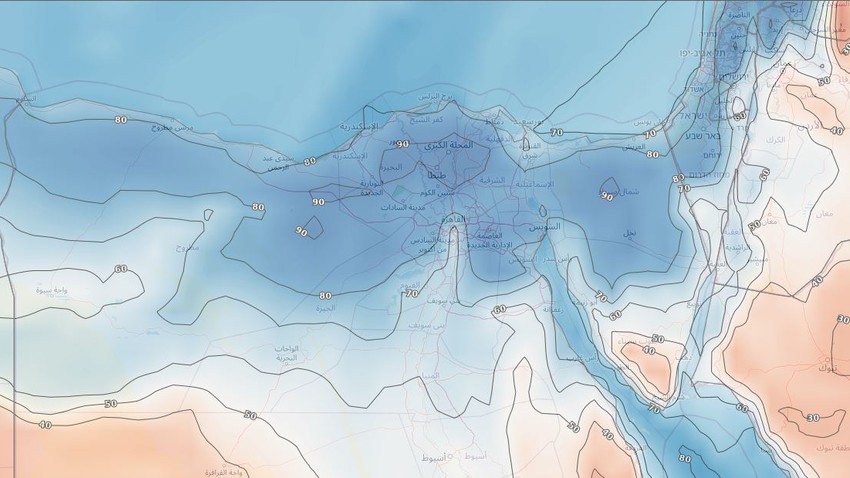 Arab Weather - Weather maps in the Arab Regional Weather Center indicate that temperatures will remain higher than their rates for this time of the year in the coming days, and the weather will be mild summer in the northeastern highlands of Egypt, while it is relatively hot to hot in the northern regions, and very hot in The rest of the regions, especially the southern and desert parts of the country, coincide with the appearance of clouds at medium and high altitudes, and there is a possibility of local showers of rain from Sunday to Tuesday on parts of the northern coasts, including opportunities in Marsa Matruh.

Indications of high temperatures from Thursday and through the weekend

According to preliminary indicators, temperatures will rise from Thursday and during the weekend, especially in the northern regions of the country, where the weather becomes very hot in many areas, including the capital, Cairo.

The weather during the coming nights will be pleasant and refreshing in the northern regions, and tends to be cold in the northeastern highlands in the late times of the night and during the early morning, coinciding with a noticeable rise in surface humidity levels to exceed the 90% barrier, and fog gradually forms during the passage of night hours in parts of the country. It is different from the northern regions, and it is not excluded that the fog is sometimes thick, causing a decrease in the horizontal visibility to less than 1000 meters.

While the weather at night is relatively hot to hot in the rest of the country, it tends to be moderate in some parts during the late night hours and dawn.

Northwesterly moderate winds blow over the Republic, active in the Gulf of Suez and the Gulf of Aqaba, and the winds are accompanied by strong gusts sometimes, especially in the afternoon and evening periods that raise dust and dust in the desert and open areas, while the waves in both Gulfs rise to about a meter and a half or more than that sometimes. .