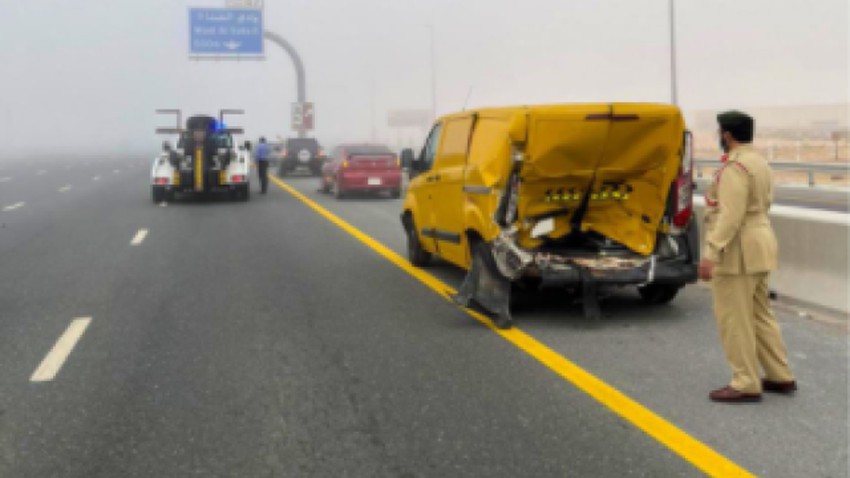 Arab Weather - A report was received by the Operations Department of the General Traffic Department of Dubai Police stating that a collision had occurred between several vehicles as a result of fog and low visibility , and the failure of drivers to leave a sufficient safety distance, as the collision began between two vehicles, which resulted in a series of collisions between vehicles. The other, 28 vehicles were damaged, and one woman was moderately injured.

The Director of the General Directorate of Traffic at Dubai Police, Brigadier Saif Muhair Al Mazrouei, appealed to drivers to exercise caution and caution while driving in fog times, and to adhere to security and safety rules, including:

Slow down and leave a sufficient distance between vehicles more than the normal distance during fog.

- Do not overtake other vehicles.

Avoid standing in the middle of the road in the event of a minor accident.

Avoid changing lanes unless necessary, while adhering to the turning signals.

- Stop the vehicle outside the right of way in the event of lack of clarity of vision and use the four signals to warn vehicles coming from the back.

Do not use high lights that obstruct other drivers' vision, and do not use hazard lights while driving.

Not to be occupied with anything other than the road.

- Use of windshield wipers, and get rid of the steam that accumulates on the windowsills inside the vehicle.

Beware of road surprises, as they play a big role in the occurrence of accidents.