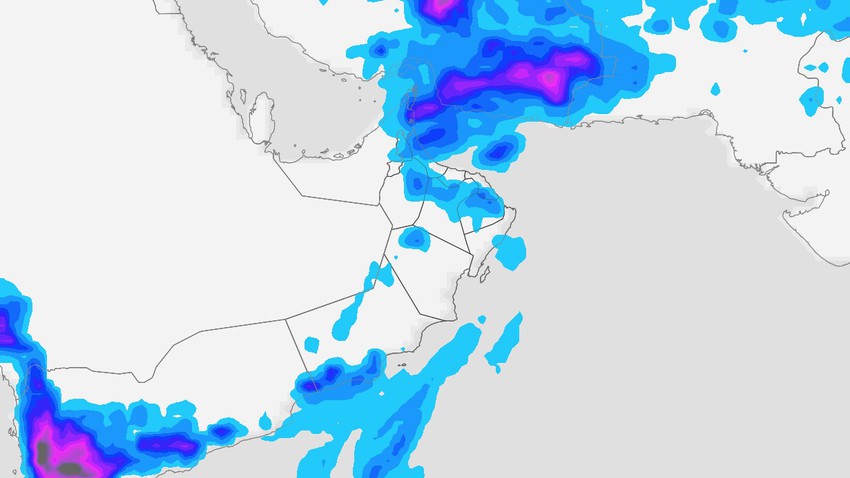 Weather of Arabia - according to the latest outputs of weather forecast models, indicating that the country will continue to be affected by unstable weather conditions during Tuesday and Wednesday, and the reason for this is that the region is affected by the extension of an air depression in the upper air layers (far from the surface of the earth), in conjunction with a low concentration Thermal weather over the Empty Quarter, causing instability to rise, increasing the chances of thunderstorms in some areas.

Find out which areas are covered by rain opportunities

Details of rain forecasts and areas covered for Tuesday and Wednesday

The latest weather forecast issued by the Arab Weather Forecast staff indicates that unstable weather conditions will affect the country on Tuesday and Wednesday, as thunder clouds multiply, especially during the afternoon and evening, and become cumulative thunderstorms accompanied by rain in various regions, concentrated in the northern and eastern regions and some interior regions , Including Ras al-Khaimah, Fujairah, Sharjah and the eastern parts of the capital Abu Dhabi , and the rains are mostly light to medium intensity with heavy foci sometimes, accompanied by showers of hail and great activity at wind speed.

On the other hand, the winds are fluctuating in direction, active with speed, with strong gusts sometimes that stir up dust, working on a decrease in the horizontal visibility, especially in the interior parts, and the sea on Tuesday is medium waves in the Arabian Gulf, while it is turbulent sometimes in the Sea of Oman, which will negatively affect On the maritime traffic , and the sea will return with light waves in both the Arabian Gulf and the Sea of Oman from Wednesday.

The effect of thunderclouds diminished from Thursday

As of Thursday, the chances of rain fall on the country, with it remaining weakly above the eastern highlands , and the winds will be fluctuating in a moderate direction, activating sometimes and causing dust and dust in some areas.