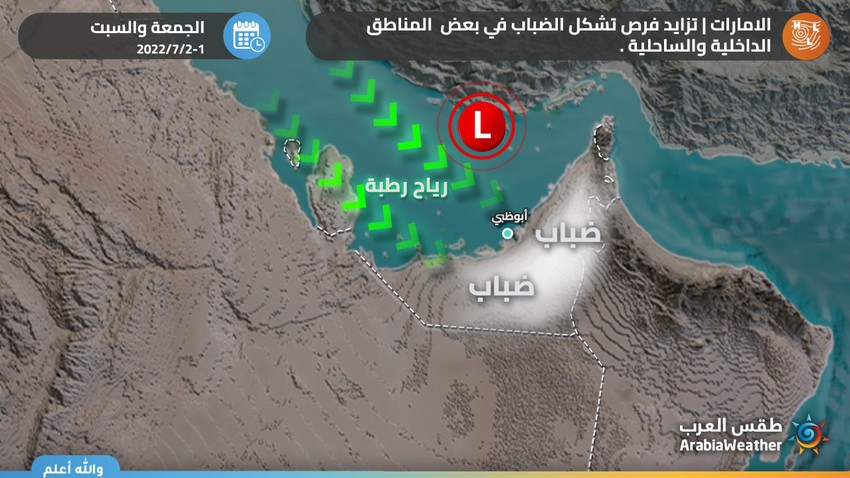 Weather of Arabia - The latest outputs of the numerical models processed by the Air Operations Department indicate a superficial low air concentration in the Arabian Gulf that leads to a rush of very humid northwestern air currents towards many areas of the Emirates on Friday night / Saturday and Saturday morning, where the surface humidity exceeds the 90% barrier in Some regions, especially the western regions, coincide with the availability of all favorable conditions for the formation of fog.

Where fog forms with the late night hours in parts of the coastal areas, and the chances of fog formation include the western interior regions, especially Madinat Zayed and parts of the capital Abu Dhabi, and it includes parts of window roads linking the capital with Dubai, in addition to some eastern areas.

Read also: Weather details from the National Center of Meteorology

Chances of fog formation continue Saturday night and Sunday morning, but with its retreat from the western regions

Chances of fog formation continue during the late night hours of Saturday/Sunday night and during dawn and Sunday morning on some coastal and interior regions, especially the northern parts, while the chances of fog recede from the western regions, and fog opportunities include Saturday night and Sunday morning, parts of the city of Dubai and parts of the capital Abu Dhabi. Abu Dhabi, in addition to the road that leads to and from the city of Dubai from the capital Abu Dhabi, and the chances of fog extend again to include the far eastern regions, specifically Fujairah.

Fog may be thick in some areas

During the coming days, the fog will be of varying intensity according to the region. It is not excluded that the fog will be dense during the late night hours and early morning in some coastal and inland areas, causing a decrease in the horizontal visibility to less than 1000 meters sometimes.

The scientific reason behind the formation of fog in the Emirates is due to the rush of very humid northwestern air currents coming from the Arabian Gulf, coinciding with the clearness of the clouds, a decline in wind speed and the presence of condensation nuclei, as the moist air condenses near the surface of the earth and leads to the formation of fog.

This type of fog is known as radiation fog, and it usually forms at the late night hours and continues to form until the morning hours, but it begins to gradually fade after that at sunrise due to the rise in the surface temperature of the earth.