Emirates | Observing the rush of moist winds in different layers of the atmosphere, with which the chances of thunder formations rise around the middle of the week 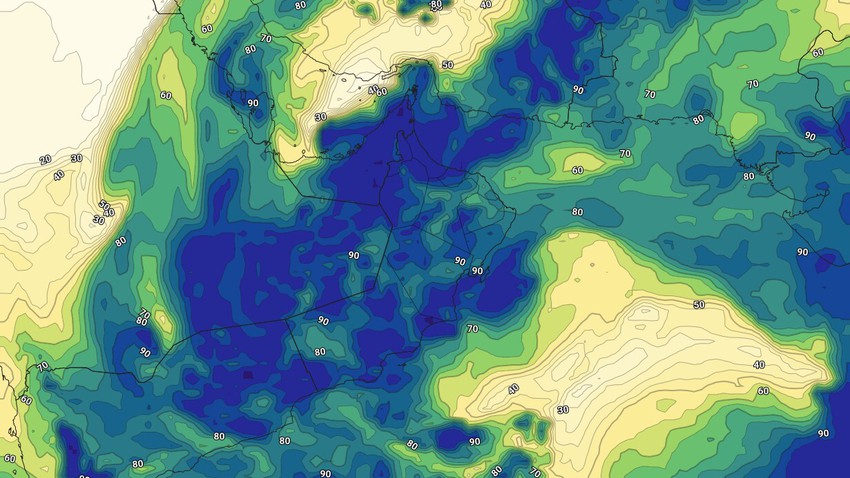 Arab Weather - The weather forecast staff at the Arab Regional Weather Center monitors a rush of moist winds in the upper layers of the atmosphere coming from southern Pakistan through the Sea of Oman towards the Emirates and coincides with a rush of moisture also in the middle and low air layers coming from the Arabian Sea around the middle and end of the week current.

Increased chances of thunderstorms due to humid winds

As a result of the rush of moist air currents in the various layers of the atmosphere and the convergence of winds from different sources in conjunction with an air presence on the surface, the chances of the formation of thunderstorms increase during the middle of the week, starting from the southern and southeastern regions, specifically the city of Al Ain, all the way to the northern and western interior regions, including parts of the interior. From Madinat Zayed, so that the opportunity is prepared for the formation of cumulus rain clouds over parts of those areas.

Read also: The National Center in the Emirates expects the country to be affected by an air depression

This increases the possibility of precipitation of varying intensity, accompanied by the occurrence of lightning and thunder, and perhaps thunderstorms, which are naturally associated with brisk winds that raise dust and dust, leading to a decrease in the horizontal visibility, and more details will be reviewed later.