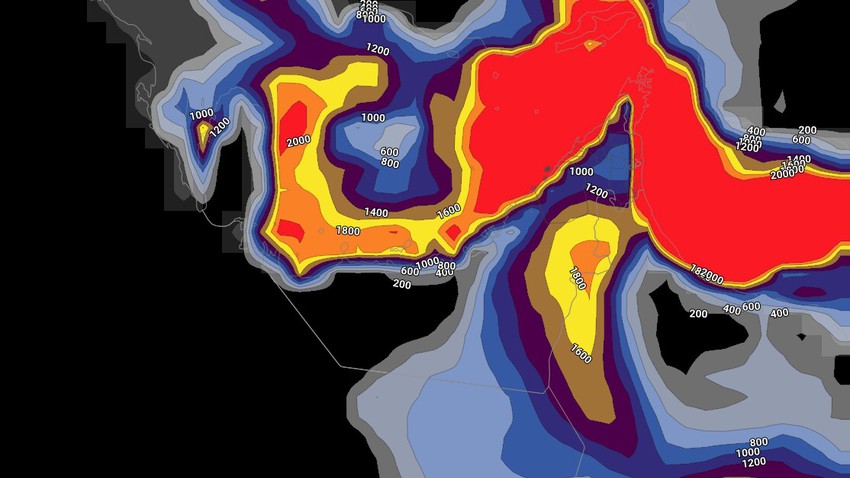 Arab Weather - There is a rise in temperatures on Sunday, and the weather is hot in the coastal areas, and very hot in the rest of the regions, and the winds are fluctuating in direction and light to moderate in speed, activating sometimes over some areas.

The weather is also warm at night hours over all regions of the Emirates, and the winds are variable in direction and light to moderate in speed.

The effect of the hot air mass on the country is deepened on Mondays and Tuesdays, so that the temperatures rise in addition and the weather is hot in the coastal areas, and it is very hot in the rest of the regions, and the temperatures are forty in the interior regions, especially in the western parts, with a remarkable rise in degrees Night temperature compared with the previous nights, so the weather returns to become relatively hot at night hours.

Low temperatures on Wednesday and Thursday

It is expected that the temperatures will be lower on Wednesday compared to what they will be during the day on Tuesday, but as the weather remains hot to very hot in general during the daylight hours, and there is a remarkable decrease in the night temperatures compared to the previous nights, and the weather returns to become warm in all regions.

“God willing,” it is expected that there will be a possibility that thunderstorms of rain will fall on the eastern mountainous heights on a daily basis, and the latest outputs and indicators of numerical models indicate that the opportunities for thunderstorms will expand on Wednesday to include different and random parts of the east of the country, and it is recommended to follow the updated weather forecasts daily. Through the Arab Weather website and application, for more details.