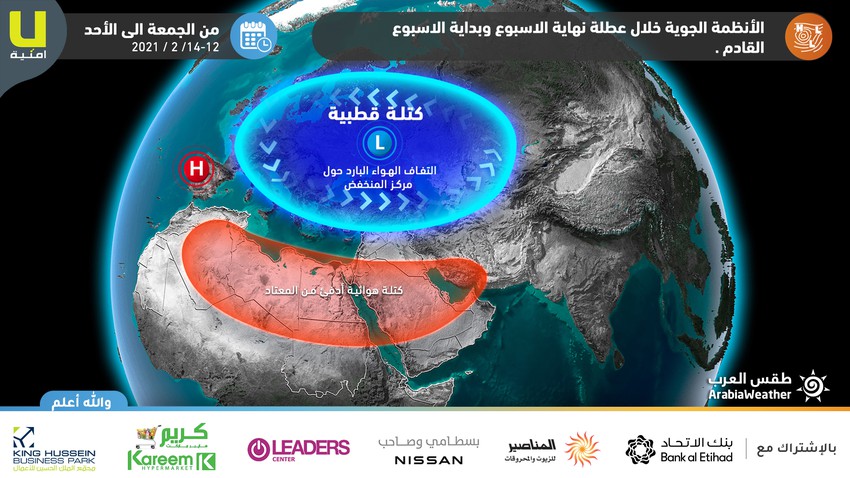 Weather of Arabia - A record and harsh cold wave hits the European continent meanwhile, with the arrival of the polar mass separated from the North Pole, where most European capitals except those bordering the Mediterranean Sea temperatures below zero degrees Celsius, and some are below the minus 20 degrees Celsius And this cold wave caused snow to fall on coastal areas that do not usually experience snow, such as the coast of the Netherlands, which has not seen snow for more than 10 years.

From Saturday, an air mass will be pushed towards Europe, this time much cooler, Siberian origin, which is one of the coldest types of air masses on the face of the earth, will cool with additional temperatures, especially in the center and east of the continent, with expectations that the German capital Berlin will be recorded as an example below the Minus 20 degrees at night. While the situation will be worse in the Russian capital, Moscow, when it records a temperature of 30 degrees below zero degrees Celsius.

This frigid air mass will be very huge and close to regions that are considered temperate in climate, such as the Mediterranean region. Nevertheless, this air mass will continue to move southward, striking strongly against Italy, then Greece and Turkey, early next week.

Thermal extremism in the Levant, Egypt, Iraq and northern Saudi Arabia within the next week

Physically, it is known that every action has an opposite reaction to it in direction and equal to it in strength, this physical theory may apply to what will happen next week, with the start of the polar mass eruption from the north (Europe) towards the south (the Mediterranean), this movement will be matched by another movement Opposite to it, which is a rush of warm winds from the south (the African Sahara) towards the north (Egypt, the Levant and Iraq), where temperatures will rise significantly and significantly on Saturday and Sunday, in the forefront of the movement of the cold air mass that will arrive in the middle of the week to reduce temperatures sharply and significantly. In short, it will be the beginning of a spring week par excellence and a winter end par excellence.

For professionals and amateurs ... Tunisia's small depression is the first spark of a huge polar eruption

Before going into the details of the Tunis depression, it is okay to take a long look at Europe with this weekend, as a deep depression is centered over Ukraine. It is the center of the so-called polar vortex that keeps the cold air wrapping around its center and preventing it from liberating and moving away from it, but This depression will not last for long, as it will withdraw quickly towards Siberia, leaving Europe under the weight of cold polar air and without a destination or engine.

We go back and take a look at Saturday, specifically towards the western Mediterranean, where a small air depression is formed north of Tunisia and gradually moves towards southern Italy and then western Greece, at this specific stage this depression becomes in a position that makes it able to draw part of the cool air liberated from Europe It is fed by it and becomes rapidly huge and is able to be the vortex and the new engine controlling the direction of cold air from Europe, here and at this stage i.e. on Saturday, a strong push of cold air will occur south towards this depression and start the journey around it and move with it towards the middle and east The Mediterranean Sea

Thanks to this rush is also due to the high airspace over western Europe, which acts as a buffer against any depressions from the Atlantic Ocean towards Europe.