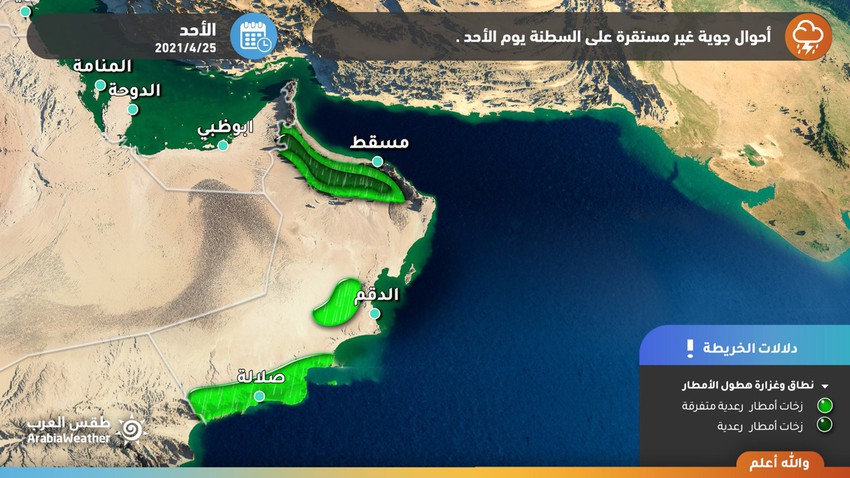 Arab Weather - Weather maps through the Badr system developed by ArabiaWeather indicate an expected improvement in the chances of rain in parts of the Sultanate of Oman starting from the beginning of next week, resulting from an influx of tropical moisture coming from the Arabian Sea towards the region, which raises the possibility of the emergence of thunderstorms Rainy after a long wait and a long dry period in the Sultanate.

If you are browsing from the phone, you can download the new ArabiaWeather application that provides accurate weather forecasts for all regions in the Sultanate, click here .

Tropical moisture flow from the Arabian Sea towards the region

The air systems in the region are represented by the control of an air height over the Arabian Sea, which would lead to the rush of quantities of tropical moisture from the Arabian Sea towards the Arabian Peninsula, including the Sultanate, coinciding with the formation of a surface temperature depression over southern Saudi Arabia that contributes to the emission of rising currents that enhance the building process. Rain clouds.

With the hours of the day on Sunday, it is expected that the unstable atmosphere will start affecting the heights of the Hajar Mountains, working on the multiplication of thunderstorm clouds and rain falling with varying intensity, and gradually expanding during the week to include large parts of the Sultanate, especially the northern region and coastal areas, accompanied by moderate and heavy rainfalls. They are also accompanied by thunderstorms and perhaps hail showers, in addition to the activity of dusty and dusty downwinds.

This expected weather event comes after a short break, and the rainy season's performance is much lower than what has been assumed until this period.