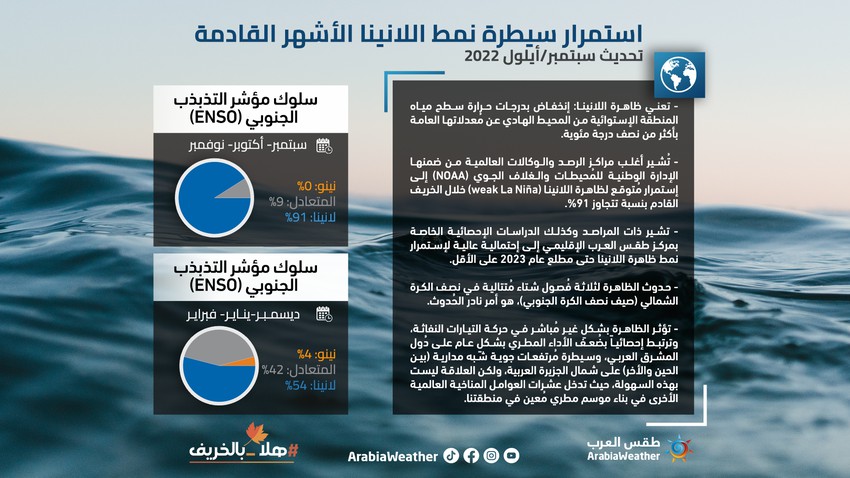 Weather of Arabia - Most of the monitoring centers and international agencies, including the National Oceanic and Atmospheric Administration (NOAA), in addition to the Japanese and Australian authorities concerned with this field, indicate an expected continuation of the La Niña phenomenon during the coming autumn by more than 91%, and the La Niña phenomenon means a decrease in temperatures The surface waters of the tropical Pacific Ocean are more than half a degree Celsius above their general averages.

The same observatories, as well as the statistical studies of the Arab Regional Weather Center, indicate a high probability that the pattern of the La Niña phenomenon will continue until at least the beginning of 2023, and the occurrence of the phenomenon for three consecutive winters in the northern hemisphere (summer of the southern hemisphere), is considered a rare occurrence. 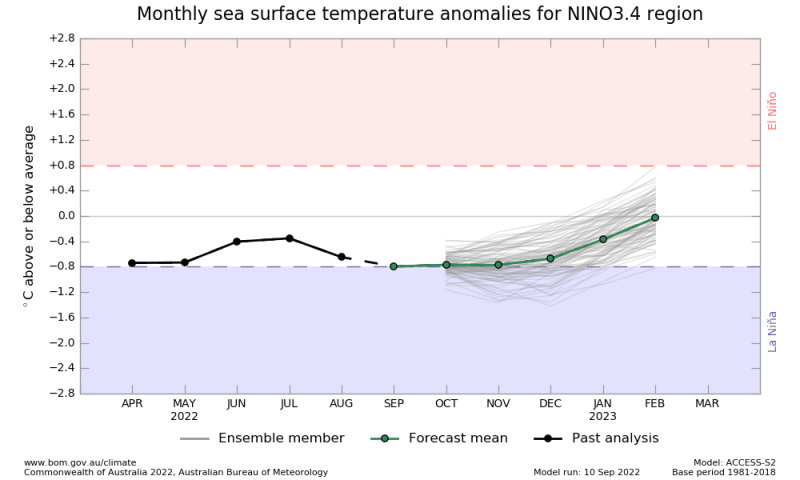 Specialists in the Arab Weather Center believe that the La Niña phenomenon is directly related to the distribution of “commercial” winds and the accompanying weather disturbances over large tropical and tropical regions around the world, causing floods in many areas such as the Australian continent and drought in other areas such as the deserts of Peru in South America, And with high rates of correlation with the availability of some other auxiliary factors, while when we move away from the equator to the north and south, the effect of this phenomenon on the weather condition decreases, and the other contributing factors also increase to become dozens of factors.

Specialists add that the phenomenon indirectly affects the movement of jet streams in the upper climatic layer of the atmosphere and atmospheric heights that arise at latitudes close to 30 degrees. The control of subtropical air altitudes (from time to time) over the north of the Arabian Peninsula and Egypt is higher than usual, but the relationship is not that easy, as dozens of other global climatic factors enter into building a specific rainy season in our region, and these factors are taken by the weather forecast staff in Arab Weather" in the construction of the seasonal bulletin that was issued earlier in mid-September. 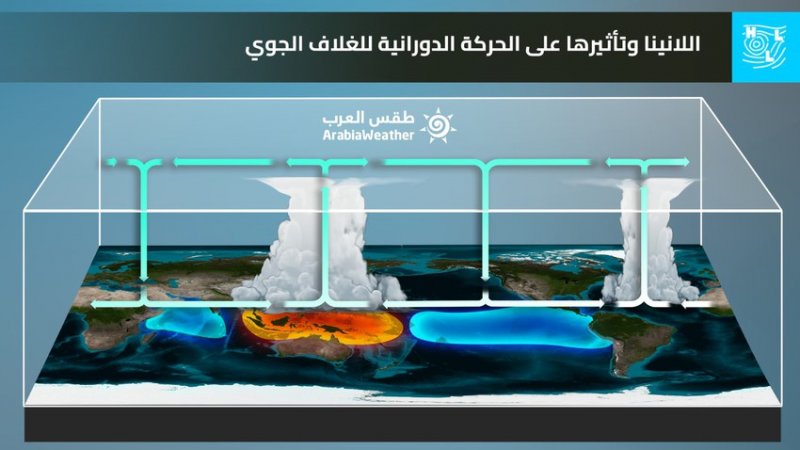 "Misconceptions about El Nino" is the title of a study published by the National Oceanic and Atmospheric Administration (NOAA) expressing that El Nino and its counterpart La Niña are an atmospheric variable that contributes among dozens of other variables in the weather, perhaps the most prominent of which is the surface temperature of the waters of the northern half of the Atlantic Ocean (AMO) and the movement of Occasional air currents in the stratosphere (QBO), and many other weather factors, that is, the weather condition is not exclusive and the result of a particular weather phenomenon.