Expectations of the continuation of the La Niña phenomenon in the coming months, so what are the repercussions of this on weather phenomena around the world 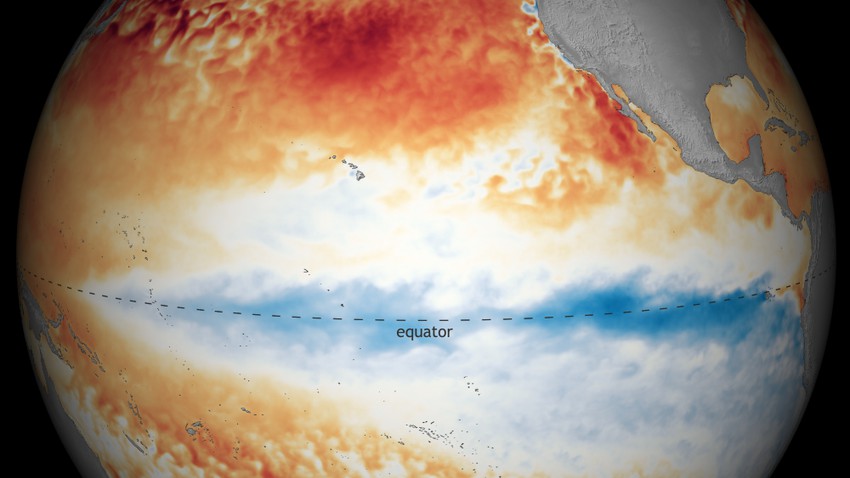 Weather of Arabia - Most of the monitoring centers and global agencies, including the National Oceanic and Atmospheric Administration (NOAA) indicate an expected continuation of the La Niña phenomenon during the coming months, and the La Niña phenomenon means a decrease in surface temperatures of the waters of the tropical Pacific Ocean from its general rates by more from 0.5 ° C. Weather forecasters at the Arab Regional Weather Center reported that the global La Niña phenomenon has direct and indirect repercussions on weather patterns around the world.

Regarding the extent of their effects, weather forecast experts in Arab weather said that they indirectly affect the movement of jet streams in the upper climatic layer of the atmosphere and atmospheric heights that arise at latitudes close to 30 degrees north, and are also statistically related to poor rain performance or spacing / intermittent Chances of rain in general over the countries of the Arab Mashreq, and the control of semi-tropical air altitudes (from time to time) over the north of the Arabian Peninsula and Egypt more than usual. 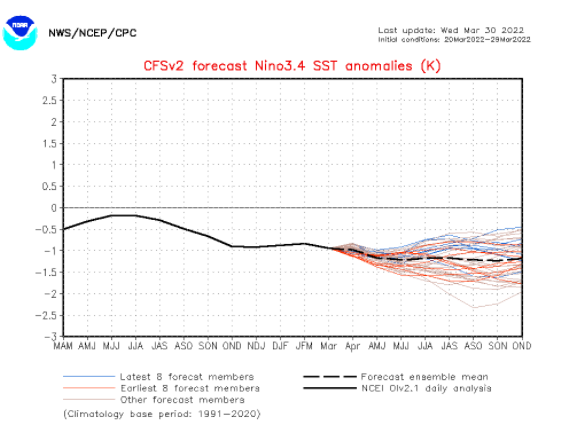 They added that the La Niña phenomenon has an impact on a number of strong weather phenomena around the world, including an increase in the activity of Atlantic hurricanes, perhaps the most prominent of which happened in the 2020 hurricane season, and its impact extends towards the Indian Ocean, as it indirectly leads to a decrease in the surface water temperature in the section. The western tide is drawn from the Indian Ocean and the Arabian Sea, and the humid eastern tide is coming, God willing, from the western Pacific Ocean through the China Sea to the Bay of Bengal. These weather conditions provide a fertile and incubating environment for the emergence of tropical conditions in the Bay of Bengal.

The La Niña phenomenon is not just an ocean phenomenon, but an interaction between the ocean and the atmosphere

The trade winds blow from east to west in the equatorial region of the Pacific Ocean as a result of the Earth’s rotation around itself and from here begins the story of La Nina, where with the increase in the activity of the trade winds these winds push the warm water to the western part of it to increase the density of the air and heavier compared to the eastern part, so that the warm air rises The moist air forms a system of low atmospheric pressure, then the air travels again along the upper part of the troposphere towards the eastern Pacific, then converges above this cold air and descends along the eastern coast of the Pacific Ocean, forming a region of high atmospheric pressure, and this cycle is attributed to its discoverer Walker .

When the La Niña phenomenon prevails, the water becomes warmer than usual in the western part of the Pacific Ocean, the areas of the Australian continent, as we mentioned earlier, to increase the activity of thunderstorms and convection in those areas, and in turn, the rains weaken in the coasts of Peru and South America in light of the cold water adjacent to it, this The effects are only the beginning of the La Niña story, as this rising air in the equatorial Pacific branches away from the equator toward higher latitudes in a north-south direction within what is known as the Hadley cell circulation. 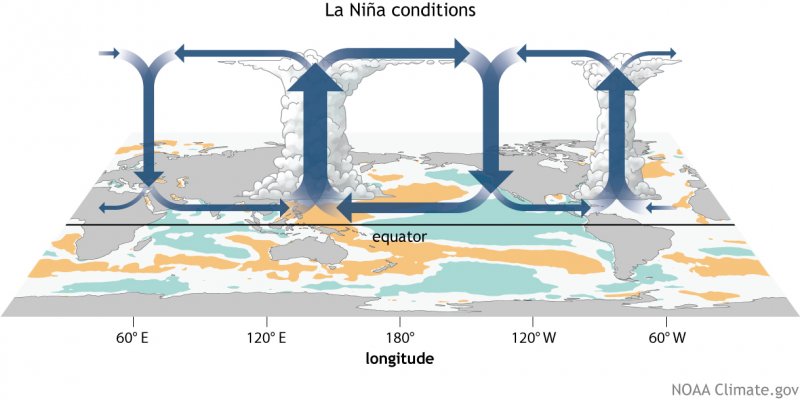 The La Niña phenomenon causes increased cooling in the upper equatorial Pacific Ocean, and this leads to a striking change in the strength of the rotation of the Hadley cell to make the air flow towards the poles become less strong, and thus indirect effects on circulation patterns around the world for example the movement and location of currents The jet (which is very fast air currents in the upper climate layer in the atmosphere) and the air altitudes that arise at latitudes close to 30 degrees north, such as the subtropical high altitude.

When the atmosphere is affected by the La Niña phenomenon, extreme weather conditions are formed that affect different regions of the world, including the Atlantic Ocean. Many records in terms of the number and severity of hurricanes, and then implemented the names of American hurricanes and resorted to using the Greek alphabet in a historical event.

Weather forecast experts at the Arab Weather Center believe that the direct reason is attributed to the increase in the movement of trade winds coming from the east to the west in light of the La Niña conditions, which raise temperatures in what is known as the MDR region, which is an area located in the middle of the Atlantic Ocean and tropical conditions develop above it. They added that the La Niña phenomenon has indirect effects in weakening the shear winds in the Atlantic basin due to the colder waters in the eastern Pacific Ocean, causing low-level and weak shear winds also in the Caribbean Sea, and these conditions are considered favorable for the growth of tropical conditions.

Early and vigorous tropical activity in the Bay of Bengal

The La Niña phenomenon has clear effects on the northern Indian Ocean, so that the La Niña conditions increase the rush of the humid eastern tide, which is coming, God willing, from the western Pacific Ocean through the China Sea to the Bay of Bengal. These weather conditions provide a fertile and incubating environment for the emergence of tropical conditions in the Bay of Bengal, and raise the temperature The water surface in the eastern part of the Indian Ocean, where the growth and development of tropical states depends mainly and largely on the presence of a warm water body, and hot water is the fuel that operates these tropical systems. The effect of the La Niña phenomenon extends towards the Arabian Sea as well, and indirectly leads to a decrease in the surface water temperature in the western part of the Indian Ocean and the Arabian Sea, which leads to a decrease in the amount of water vapor in those areas, with consequences for the Arabian Peninsula.

Arab weather indicates that the La Niña phenomenon is not the only cause of all weather phenomena in the world, but rather it is an atmospheric variable that contributes among dozens of other variables in the weather condition, where the weather condition results from the outcome of complex weather factors, and is not exclusive and as a result of a particular weather phenomenon.