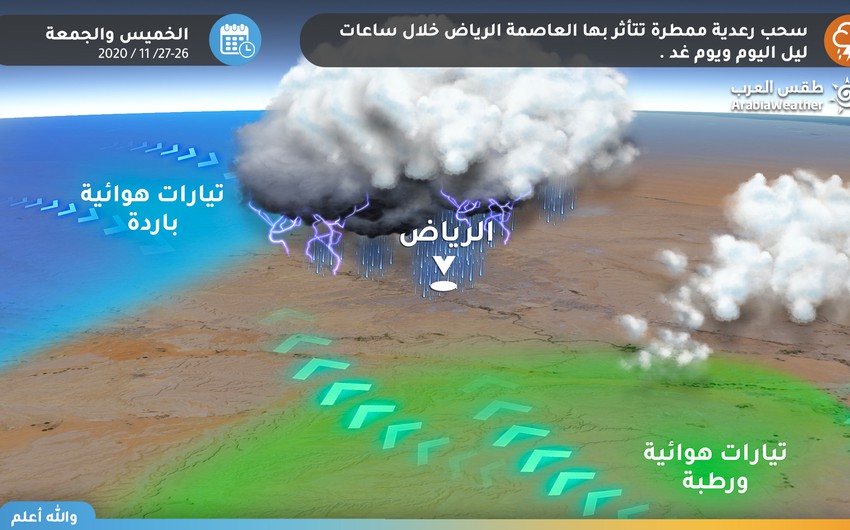 Arab Weather - With the early morning hours of Thursday, the good weather began to be afflicted in the western regions of the Kingdom, and included large parts of it, starting from the coasts of Rabigh, Jeddah and Makkah, extending to the southern regions, including the areas of Asir, Al-Baha and Taif, and they were accompanied by thunderstorms of varying intensity and sometimes abundant It resulted in the formation of torrents and water bodies and the flow of valleys and reefs, thank God.

The rain clouds began to gradually extend until the time this news was prepared towards parts of the central regions, including Al-Qassim and the far south-west of the Riyadh region administratively, and were generally light in intensity , and according to the latest outputs of the numerical models treated, it is expected that the effects of the weather condition will extend further into the center of the Kingdom, specifically towards Riyadh region with the late night hours on Thursday, God willing, so that it is concentrated in the west of the region, the suburbs of Dawadmi, and the west of the city in particular.

Weather forecast for Riyadh during Friday

The actual beginning of the weather condition will begin with the watering of the city of Riyadh, which will start with the hours of Friday morning, when rain clouds begin to gradually condense over the city and its surroundings, so that showers of rain fall, sometimes thunderstorms, and sometimes accompanied by the activity of surface winds descending sometimes. The capital, with thunderstorms falling at intervals, God willing, of varying intensity, and the opportunity lasts until the hours of the night.

The opportunity remains favorable for showers of rain at separate intervals during the day, so that cloudy weather prevails in general, and the temperature decreases in an additional way, so that it becomes at the beginning of the twentieth in the day, it drops at night to the limits of only 15 degrees, and the weather tends to get cold with the late night hours and early morning.

The weather deteriorates during Sunday

The weather decreases gradually during Sunday, according to the latest weather updates addressed until the hour of preparing this report, so that the atmosphere becomes cloudy with opportunities for some sporadic rains, but weaker than the previous days, with a pleasant atmosphere during the day and tends to be cold during the night hours with great temperatures reaching To 24 ° C, it drops at night to 17 ° C, God willing

Surface winds are expected to be active during the coming days in all central regions, especially in the city of Riyadh, specifically during Friday and Saturday, so that they become exciting to some dust and dirt at times and warn of their activity during the external roads connecting some neighboring cities, and there will be a decrease in temperatures as of Friday so that It becomes at the beginning of the twentieth centigrade during the day, and it drops at night to the limits of only 15 degrees centigrade with a cold climate, so it is recommended to wear warmer clothes.