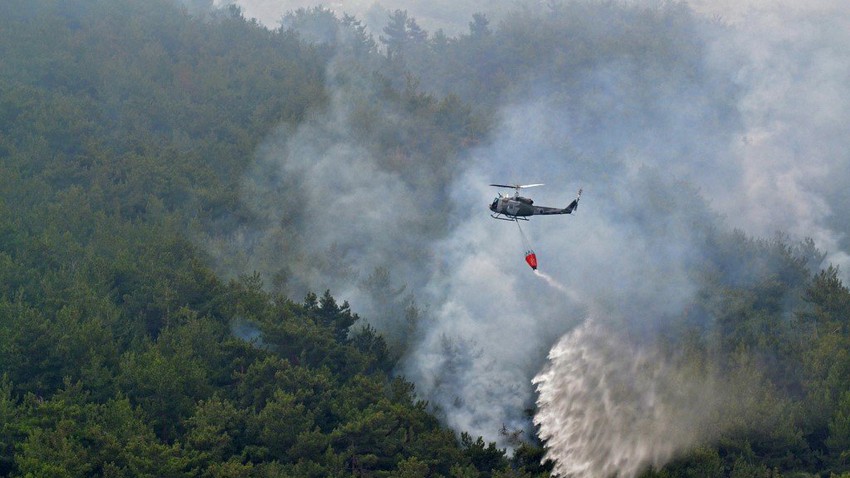 Arab weather - With high temperatures and the spread of drought, the season of fires that devours the green forests of Lebanon begins for the second year in a row. The fire devoured large areas of forest.

40% of the area of Battermaz is old pine forests inhabited by animals that became homeless after the fire.
This village has 4 springs that irrigate large areas, and of course it is currently damaged, 50% of its area is agricultural land that has been badly damaged.
By the way, #Btarmaz has about 1,400 voters, but we all know after the elections, not as before. pic.twitter.com/PWz4ETqnfe

While another fire broke out on the fourth of this June in a forest in Baabda district, but the local forces and the people of the area were able to put it out due to the availability of the necessary tools to put out the fires.

On Wednesday morning, the Minister of Environment in the caretaker government, Nasser Yassin, went to the site of the fire, which the Lebanese army helicopters began participating in putting out, after they were unable to intervene on Tuesday due to the thick fog, and the civil defense mechanisms could not reach.

A circulating video of the firefighting work in the forest of #Batarmaz #Danniyeh this morning, with the participation of the Lebanese army helicopters, in which civil defense units, the people of the area and volunteers from #Darb_Akkar have participated since yesterday, with a field escort from the Minister of Environment Nasser Yassin @CivilDefenseLB @nasseryassin pic.twitter.com/afxhJKr57q

The Minister of Environment, Nasser Yassin, confirmed that "the fire spread over the entire area of Mount Batrmaz, which is one of the dense forests rich in wild pine forests."

Yassin pointed out that "it is not possible to determine the extent of the damage until after the fire subsides," and called for "a serious investigation to hold the perpetrators accountable in case the fire was staged. It is not the first time that a fire has occurred in this forest, in 2013 a large fire broke out, and smaller fires were repeated during the past years."

For his part, environmental activist Paul Abi Rached revealed that "Jebel Batrmaz-Al-Safira is known to be the largest wild pine forest in the Middle East , and it includes oaks, cherries, medicinal and wild plants. No accurate data is available yet on the affected area."

Abi Rashed said, warning: "We have reached the red line globally in the issue of climate change, and the loss of every tree negatively affects the global climatic balance, and the impact will not be limited to climate, water and air quality, but will extend to the ocean. This is reflected in the water flowing from Lebanon towards Syria and Jordan.

The Ministries of Agriculture and Environment stated that they will ask the judiciary and the security services to "investigate the causes of the fire, and to tighten the penalties if it is discovered that it was fabricated." It indicates that there are three separate points in the forest itself that caught fire, which confirms that the fire is intended as the fires that occurred in the past years, and Al-Fahal stressed that the perpetrators must be punished this time to deter the wicked from tampering and extend a hand on the remaining areas of Lebanon's green forests,

A study prepared by the Lebanese Ministry of Environment and the University of Balamand reveals the green areas and forests of Lebanon that were destroyed by the fires. The area of burned lands reached 2,838 hectares in 2021, including 2,100 hectares of green forests in the country, 215 hectares of agricultural lands and 1,631 lands with environmental diversity, according to the study. .

Forest fires .. How do they start? And what is the role of the weather in its spread?!

Can forest fires ignite on their own, or does it have to be an actor?!