Follow-up to the tropical situation: the continuation of the movement of the tropical depression westward towards the Sea of Oman, and rains of varying intensity are expected in parts of the Sultanate on Monday Arab Weather - It is clear from the latest satellite images and data that the tropical situation, classified as a tropical depression, is located to the north of the Arabian Sea, and the surface wind speed around the center is estimated at about 25 knots, and the center of the depression is away from the nearest point from the coast of the Sultanate (Ras Al Hadd) about 550 km. The emergence of a tropical depression in the Arabian Sea at this time of year is considered a rarity, as the available climatic records indicate that the last integrated tropical atmospheric system formed in the Arabian Sea during the month of July was about 50 years ago.

The results of the computer simulation show the movement of this air depression to its expectations of its movement during the next two days westward towards the Sea of Oman, coinciding with its gradual weakening, with the continuation of its limited effects on the Sultanate today in the form of the flow of rain clouds over the Governorate of South Al Sharqiah with an opportunity for some clouds to extend and scattered rain over parts of the country. From the governorates of North Al Sharqiyah and Muscat. 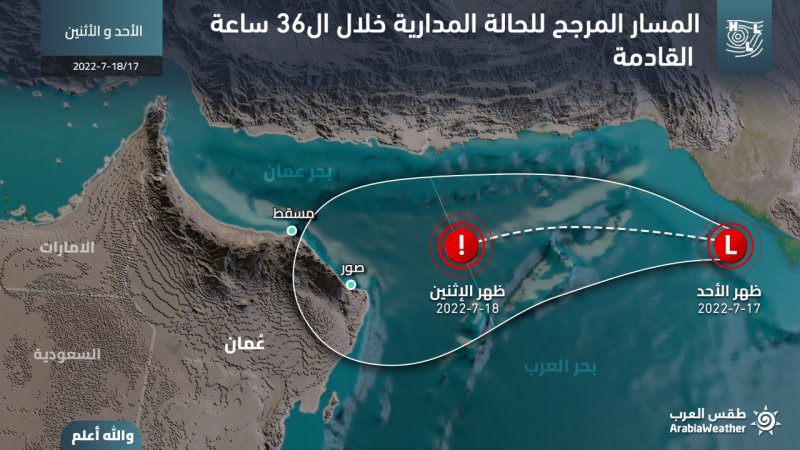 With the approach of the tropical depression on Monday to the Sea of Oman, which is then expected to weaken and begin to decline, but the accompanying clouds are expected to flow to most of the governorates of the Sultanate, to intensify the frequency of rainfall of varying intensity over the governorates of North and South Al Sharqiah, Muscat, Al Dakhiliyah, Al Wusta, parts of Al Dhahirah and South Al Batinah. Dhofar, and it is not excluded that large amounts of rain will be recorded in parts of the governorates of North Al Sharqiyah, South Al Sharqiyah and South Muscat, which leads to the flow of valleys and reefs in addition to a rise in the water level. In addition to the possibility of rising sea waves on the coasts of the Sea of Oman.

Oman - Update 3:40 pm: The spread of cumulus rain clouds along the Al Hajar Mountains and the presence of autumn clouds over Muscat