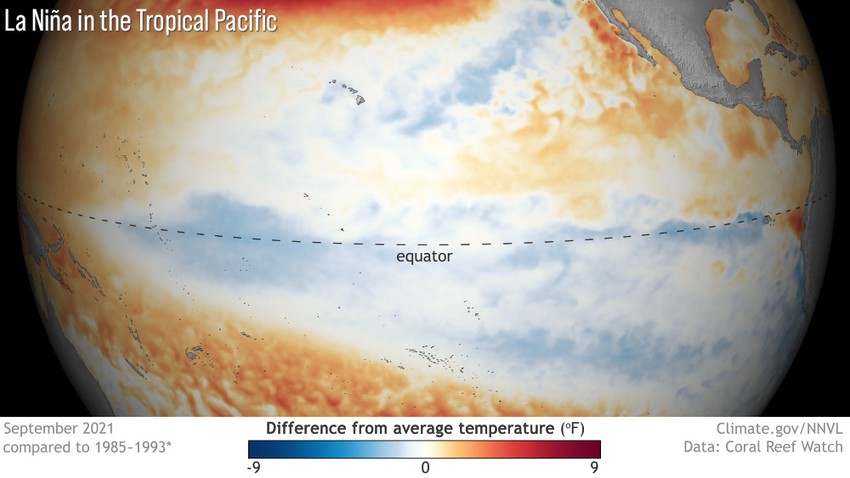 Weather of Arabia - Most of the monitoring centers and international agencies, including the National Oceanic and Atmospheric Administration (NOAA) indicate the development of the La Niña phenomenon again for the second year in a row. The Arabs are closely watching its possible consequences for the upcoming rainy season.

The rebirth of La Nina

What is the La Niña phenomenon?

La Niña is defined initially as a decrease in surface water temperatures in the tropical Pacific Ocean by more than 0.5°C from their general average.

According to what was announced by the National Oceanic and Atmospheric Administration (NOAA), the La Niña phenomenon has returned to dominate the tropical region of the Pacific Ocean, and it is expected to continue at a rate of more than 87% during the coming winter, and the La Niña phenomenon mainly affects the atmospheric systems, which leads to a reversal of that. On the weather in different regions of the world. 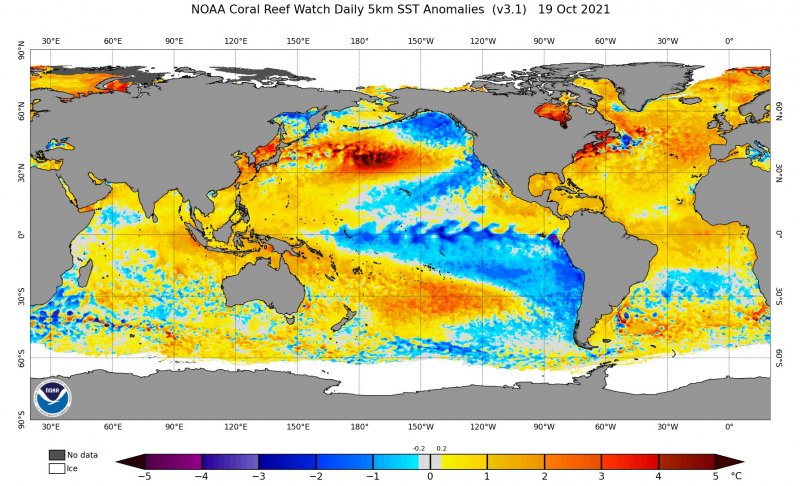 La Niña was statistically associated with an increase in extreme weather conditions, as the Australian continent fell to intensified rains due to the retreat of the warm waters in the western Pacific Ocean, in contrast to weak rains in the coasts of Peru and South America, all of which later reflects a change in the weather systems in the middle and upper latitudes and changes in the weather in regions wide.

How does the La Nina phenomenon affect the weather in the Arab world?

The trade winds blow from east to west in the equatorial region of the Pacific Ocean as a result of the Earth’s rotation around itself, and from here begins the story of La Nina. Wet, forming a system of low atmospheric pressure, then the air travels again along the upper part of the troposphere towards the eastern Pacific Ocean, forming a ring, then this cold air converges up and down along the eastern coast of the Pacific Ocean, forming a region of high pressure, and then the wind moves From the high to low system to complete this cycle, which is known as the Walker cycle.

The effect of the La Niña phenomenon is not limited to the vertical movement of air at the equator, as the rising air from the equatorial region of the Pacific branches away from the equator towards higher north and south latitudes, thus moving the hot tropical air towards the Tropics of Cancer and Capricorn to descend towards the surface of the Earth and return again to the equator and this is called the Hadley rotation.

The subtropical jet stream is formed as a result of the confluence of the upper winds from the Hadley cycle with the Ferrel cycle, which means that the La Niña phenomenon indirectly affects the subtropical jet stream and the atmospheric heights that arise at latitudes close to 30 degrees north, such as the subtropical high. The phenomenon of La Niña towards the Indian Ocean, as it indirectly leads to a decrease in the surface water temperature in the western part of the Indian Ocean and the Arabian Sea, which leads to a decrease in the amount of water vapor rushing towards the atmosphere of the Arabian Peninsula after God’s will.

The La Niña phenomenon is basically a statistical phenomenon, that is, it depends on temperature anomalies during a certain time period (since the beginning of climatic records, i.e. since 1960 AD), and the La Niña phenomenon is statistically linked to rainy seasons less than the average in the Arab Mashreq, in complete contrast in the Maghreb regions with an increase Rain, lower temperatures than their average, and increased chances of floods and torrential rains in the Maghreb regions, God willing.

Arab weather indicates that the effect of the La Niña phenomenon and its counterpart El Nino is more pronounced in the atmosphere of the tropics and the nearby areas, as the La Nina phenomenon is not the only cause of all weather phenomena in the world, but rather an atmospheric variable that contributes among dozens of other variables in the weather condition, as it produces a state of Weather is the result of complex atmospheric factors, and is not exclusive and the result of a specific weather phenomenon.