France on alert as wildfires rage in southwestern Europe 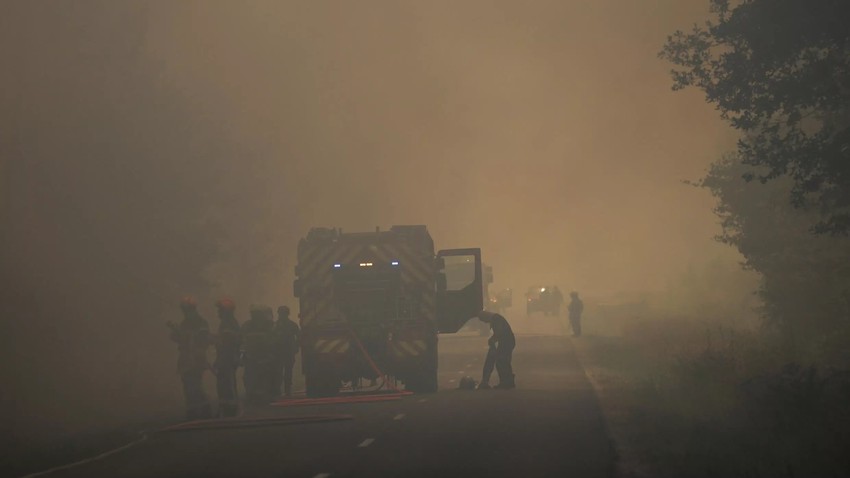 The heat wave is the second to sweep parts of southwestern Europe within weeks, and fires burning in France, Greece, Portugal and Spain have destroyed thousands of hectares of land and forced thousands of people to flee .

The impact of the heat on Portugal eased in the middle of the week, offset by a widening of the heat wave’s influence towards additional countries

Over the weekend, firefighters continued to control wildfires that have devoured nearly 11,000 hectares (27,000 acres) since Tuesday in the southwestern Gironde region of France.

The Spanish authorities also reported that about 20 fires continued to erupt in out-of-control forests in different parts of the country, with the fires destroying about 4,500 hectares of land .

The fires have caused the death of many civilians and emergency personnel since last week, the last of whom was a firefighter who died late Sunday evening while putting out a fire in northwestern Spain .

It is reported that forest fires in France forced more than 16,000 people (citizens and tourists) to flee, and seven emergency shelters were set up for those evacuees, and the French Ministry of the Interior announced that it would send three additional firefighting planes and 200 firefighters.

"Some areas of the southwest will be a heat disaster ," the meteorologist told AFP.

In the same context, regional leader Juan Manuel Moreno said that firefighters in Spain were able to put out forest fires that destroyed 2,000 hectares of forests and shrubs in the southern region of Andalusia .

The fire started on Friday in the Mijas mountain range in the coastal city of Malaga, and has led to the evacuation of about 3,000 people, and about 2,000 people have since returned home.

In Portugal , almost the entire country remained on high alert for forest fires despite a slight dip in temperatures, after hitting 47 degrees Celsius on Thursday, a record for July. 12 thousand and 15 thousand hectares of land in Portugal .

In Britain, the Met Office issued the first "red" warning of extreme heat, warning of a "risk to life ".

According to forecasts, temperatures are expected to reach 38 degrees Celsius in parts of the Netherlands on Tuesday .