Greek wildfires spiral out of control, one firefighter dies Weather of Arabia - Two people were killed and six regions were put on high alert as wildfires spread out of control across Greece, and huge clouds of smoke rose over the northern outskirts of Athens, as residents were alerted to leave their homes, while firefighters battled 154 fires. all over the country.

Greece's prime minister said the heat wave had turned the country into a "powder keg" , and unexpected winds had also contributed to the spread of fires and fueling the worst fires in northern Athens. The nearby island of Evia, and areas near ancient Olympia, home of the Olympic Games, were also on fire.

Government Minister Nikos Hardalias said, "We are facing another more difficult night with forest fires of unprecedented intensity and spread, and all our forces are fighting day and night to save lives, as well as volunteers."

Thousands of people were ordered to leave their homes outside Athens as the fire destroyed homes, cars and businesses. The firefighter was among the first two people killed in the fires, as a 38-year-old volunteer firefighter was killed by the fall of an electric pole in a suburb of the capital.

The other victim was the president of the Athens Chamber of Commerce, Konstantinos Michalos. He was found unconscious in a factory close to where the fire had caught. And 20 other people were injured.

Hundreds of residents and tourists on the island of Evia were evacuated on ferries and fishing boats, as bushfires approached its shores.

"We're talking about the end of the world, and I don't know how to describe it," Sotiris Danicas, the island's coast guard official, told ERT radio. 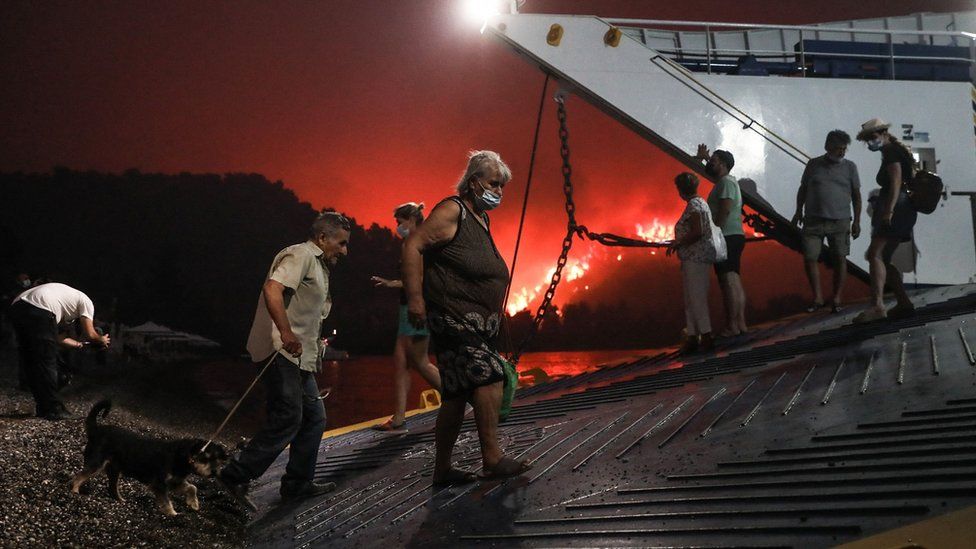 Hundreds of firefighters and nearly 20 water bombardments are trying to control fires across Greece. Additional firefighters and aircraft are being sent from countries including France and the United States.

In the village of Krionyri, near Athens, houses, businesses and factories were destroyed by fire.

"The fire is uncontrollable," Vasiliki Papapanagiotis, a resident of the area, told AFP.

"I don't want to leave, my whole life is here."

Other fires in Europe

Greece, like many parts of Europe, has been battling severe weather this summer. A week-long heat wave has sparked wildfires in many parts of the country.

And in neighboring Turkey, authorities are battling the country's worst forest fire ever. Six other neighborhoods near a power station were evacuated on Friday, fires killed eight people and tens of thousands were evacuated along Turkey's southern coast.

Greek Prime Minister Kyriakos Mitsotakis says the fires show "the reality of climate change". Temperatures in the country have been above 40°C all week.