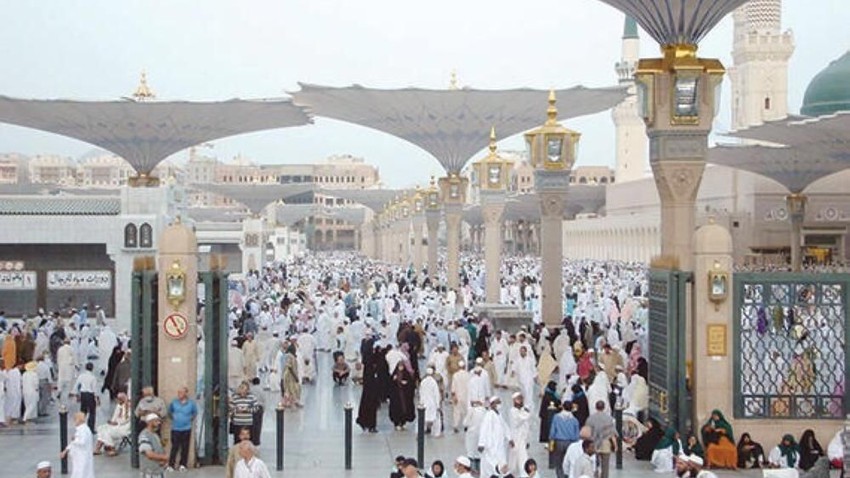 Weather of Arabia - The Saudi Ministry of Hajj and Umrah stated that the number of pilgrims who arrived in Madinah reached 266,824 pilgrims of several nationalities, who came through air and land ports to perform Hajj this year.

The ministry's statistics on the movement of receiving and leaving pilgrims in Madinah, reported by the Saudi Press Agency (SPA) on Sunday, showed that 215,580 pilgrims have arrived at Prince Muhammad bin Abdulaziz International Airport in Madinah since the start of receiving the first Hajj flights until Saturday, while the Land Migration Center received 17,774 pilgrims, in addition to the number of pilgrims remaining in Medina in terms of their nationalities.

Noting that Bangladeshi pilgrims are the most numerous in Medina on Saturday, with 12,627 pilgrims, Nigeria with 9,452 pilgrims, India with 8,857 pilgrims, Indonesia with 7,174 pilgrims, then Iraq's pilgrims with 6,661 pilgrims.

She added that 171,606 pilgrims left Medina during the past days on their way to the holy sites in Makkah, while the total remaining pilgrims in Medina yesterday reached 95,194 pilgrims of different nationalities.

The statistics of the Saudi Ministry of Hajj and Umrah Agency for Visiting Affairs showed that 448 visits were carried out to assess the homes of pilgrims in Madinah during the Hajj season this year, while the total cases of grouping for housing that have been conducted reached 1,050 since the start of the season, while the number of pilgrims who were guided in The various service sites are 588 pilgrims, in addition to carrying out 27 visits to check the health status of pilgrims in hospital during the pre-Hajj season, and carrying out 161 field visits to evaluate the performance of service providers for pilgrims in various service axes.