Has the Kingdom previously experienced strong depressions and snow during the month of March? 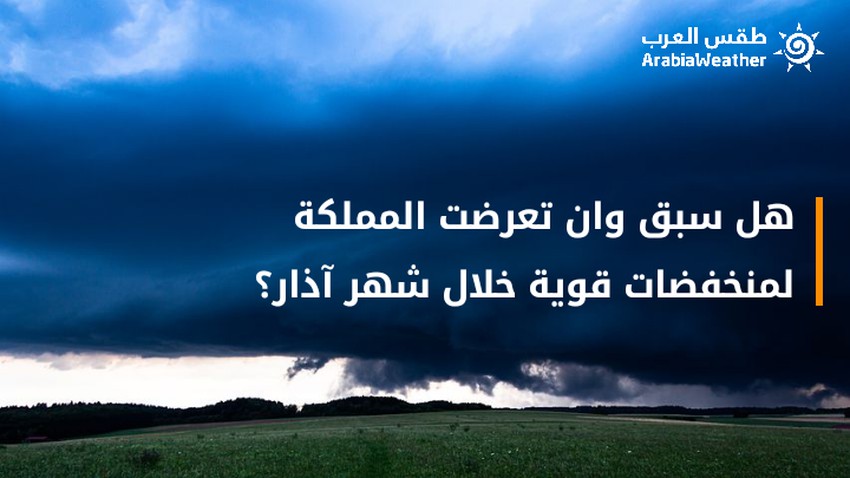 Arab weather - the month of March is characterized by several weather factors and features that distinguish it from other months of the year, where a rise in maximum and minimum temperatures occurs gradually and clearly during it, it coincides with the astronomical spring equinox, which falls on March 21 of each year, and the five-year depressions become active with the start of the equinox In the spring, however, chances of strong depressions forming during this month remain, and they have occurred several times in advance.

During the month of March, according to the Jordanian Climate Archive, the Kingdom witnessed heavy snowfall on several days of the month, most notably the first days of March 1980, and 3/18/1998 following the impact of a fiftieth atmospheric depression (which is the deepest in terms of decreasing atmospheric pressure values) in the Climate Archives. The Jordanian, 3/26/2003, 3/16/2007, and 2/3/2012

Among the most prominent of these weather conditions was on March 14, 1998, when Jordan was affected by the deepest depression in the climatic records and it was a five-year-old, which brought with it sandstorms considered one of the strongest sandstorms that affected Jordan and the region, where the wind speed reached nearly 100 km /hour The maximum temperature was recorded at more than 20 degrees, followed by a snow storm.

On Tuesday 17/3/1998, the sandstorm still affected the Kingdom with a significant decrease in temperatures and the start of heavy rain and hail in some areas, followed by snowfall and its accumulation (in yellow in some areas) due to the mixing of snow with dust suspended in the atmosphere

On Wednesday 3/18/1998, an air mass of polar origin affected the Kingdom and the Levant, with snow falling on the heights

Snow covered the upper Amman during the month of March 2007

One of the prominent weather events is also the impact of the Kingdom on March 15, 2007, with an air depression associated with a polar mass that brought snow to the capital Amman and the other mountains of the Kingdom. The Sweileh region recorded 17 cm of snow accumulation, in the same week and before the depression reached the temperature. In Oman, to more than 25 degrees Celsius.