Heat wave developments in Europe: The heat wave’s impact on Portugal declined in the middle of the week, offset by a widening of the heat wave’s influence towards additional countries 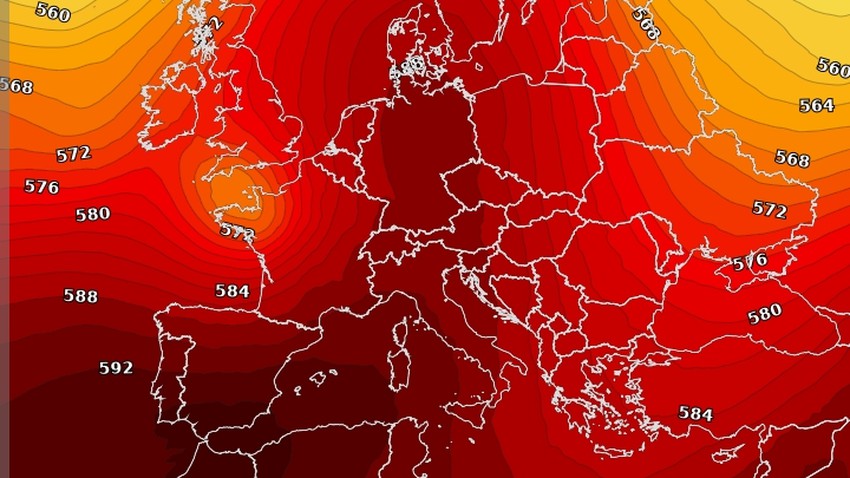 Arab weather - Western European countries remain under a blazing and historical heat wave, amid expectations that additional countries will be included in the same heat wave in the coming days in which temperatures may reach record levels.Details

The southwest of the European continent continues to be affected by the severe heat wave, especially on Spain, and its effects on Portugal will diminish from Monday. forty.

The heat wave will intensify in France in the coming days, and temperatures will touch 40 degrees Celsius in Paris

As for France, the effects of the heat wave are expected to intensify in the coming days and reach its peak on Monday and Tuesday, so that it touches the mid-forties Celsius in some areas, and is around the forties Celsius in the capital, Paris, in a very hot and exhausting atmosphere.

The heat wave reaches Britain, and expectations are that it will reach 40 degrees Celsius in London

The effect of the intense heat wave with southeast winds extends to the United Kingdom from Sunday and intensifies in the middle of the week, accompanied by a significant rise in temperatures in all regions, with the weather turning to become very hot even in the capital, London, and it is expected that the peak of the heat wave will be on Monday and Tuesday, which The capital, London, may record record temperatures that may touch 40 degrees Celsius, as for the rest of the regions, it is expected that advanced temperatures will be recorded in the 30s.

The weather forecast cadre at the Arab Regional Weather Center is watching the expansion of the heat wave’s impact to wider countries of the European continent by the middle of the week to include Germany and parts of the Netherlands and Denmark down to parts of Sweden, and up to Italy and Scandinavia so that record high temperatures reach in Rome for example to 36 degrees Celsius.

Important recommendations from the Arab weather that it is necessary to pay attention to the dangers of long and direct exposure to the sun’s rays as a result of the high chances of sunstroke, and it also warns of the danger of ignition of fires in additional and forested areas of the European continent.