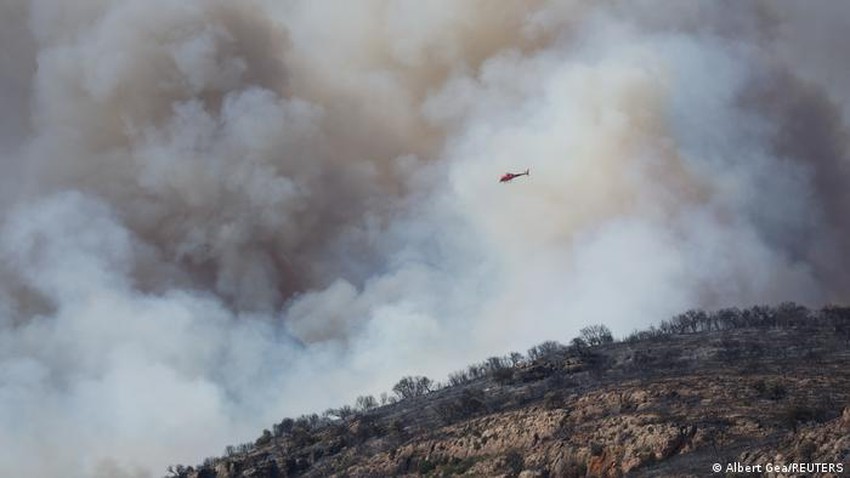 Weather of Arabia - France, Spain and other countries in Western Europe braced for a harsh weekend amid hot weather and record temperatures that have raised concerns about wildfires and the effects of climate change.

Temperatures already soared above 40 degrees Celsius in parts of France on Friday, and peaked at an early heat wave on Saturday, with scientists warning that such phenomena will now strike earlier than usual due to climate change.

"This is the first early heat wave ever recorded in France" since 1947, said Mathieu Sorel, a climatologist at Meteo France.

Authorities in the Gironde province banned all outdoor events and non-air-conditioned places from 2 p.m. on Friday, and speed limits were lowered in several regions, including around Paris, to reduce the concentration of harmful smog.

Temperatures are set to cool slightly from Sunday, with thunderstorms expected in parts of France and elsewhere in Europe.

In Spain, authorities said wildfires burned nearly 9,000 hectares (22,240 acres) of land in the northwest Sierra de la Culebra region on Friday, forcing nearly 200 people to leave their homes, and more than 3,000 people were evacuated from the city. Puy de Fou amusement park in central Spain due to a violent fire nearby.

Firefighters battled blazes in several other regions, including forests in Catalonia, where heat, dryness and winds have complicated firefighting efforts.

Spanish Prime Minister Pedro Sanchez praised the firefighters "who risk their lives on the front line in the fires" on Friday as temperatures topped 35 degrees Celsius in most parts of the country, coinciding with the world's celebration on Friday of the International Day to Combat Desertification and Drought .

Heat and drought hit other parts of the European continent

Meanwhile, firefighters battled several wildfires in Germany on Friday, including in southern Berlin, where a Federal Police helicopter was called to dump water over the site of the fire, near Frohnsdorf.

The German Weather Service (DWD) has warned of high levels of ultraviolet radiation amid temperatures reaching 38 degrees Celsius in some places.

In Italy, several towns in the north of the country have declared water rationing and the Lombardy region may declare a state of emergency as record drought threatens crops.

"As a result of climate change, heat waves started early," said Claire Nullis, a spokeswoman for the World Meteorological Organization in Geneva.

She added, "What we are witnessing today is unfortunately a warning for the future" if the concentrations of greenhouse gases in the atmosphere continue to rise and push the Earth's temperature to rise to about two degrees Celsius than it was pre-industrial.

You may also be interested in: What are the causes of global warming and climate change.. and what are the possible consequences