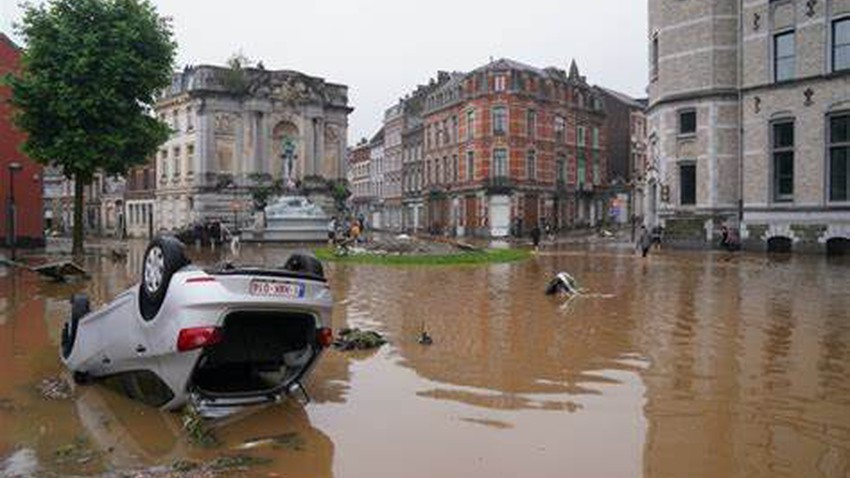 Weather of Arabia - Catastrophic floods hit Western Europe this week after heavy rains inundated areas in Germany, Belgium and the Netherlands between Tuesday and Thursday. At least 150 people were killed in the floods, many of these victims were recorded in Germany, where the heaviest rain fell, while 20 deaths were recorded in Belgium.

On Friday, German authorities said hundreds were still missing as water levels continued to rise, power outages and landslides across the country, and images from affected areas showed entire villages underwater in Belgium and Germany.

How much rain did it fall to cause such catastrophic floods?

Historic floods resulted from the largest amount of rain in living memory. According to the German Weather Service (Deutscher Wetterdienst), more than (182 mm) of rain fell in just 72 hours between 12 and 15 July 2021. Among the worst affected areas in Germany was Cologne, the city's Köln-Stamheim district which saw a deluge of 153 mm of rain per day, six times the average rainy days in that area in July.

And in the worst-hit parts of Germany, two months of rain fell in just 24 hours. Most of the heavy rainfall occurred on Wednesday/Thursday night. Why were the floods so severe?

The floods were caused by a rare combination of weather factors that resulted in exceptionally heavy rainfall.

The storm system or low pressure area over central Europe that has since been named "Bernd" was trapped between high pressure areas to the west and east.

The low pressure area dumped heavy rain loads into the affected areas over a period of three days.

Many said the intensity of the floods was exacerbated by human-caused climate change.

Some said the floods were a clear signal that stronger action was needed to combat climate change.

European Commission President Ursula von der Leyen said: "The intensity and length of events that science tells us is a clear indication of climate change and that this really shows the urgent need to work hard to solve the problem of climate change."