Hell's Gate: A decades-old crater that reveals new life in the harshest environments 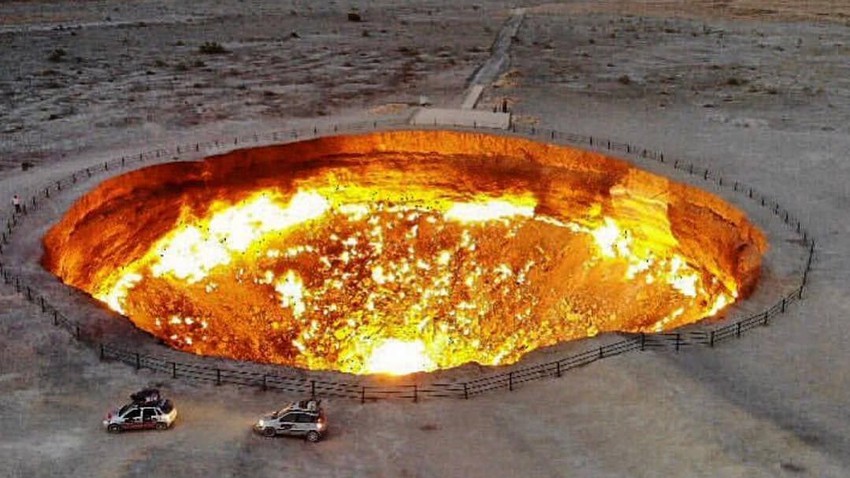 Weather of Arabia - For more than 50 years, the flaming "Gate of Hell", officially known as the Darvaza gas crater, has lit up the sky of the Karakum Desert in Turkmenistan but it is still a mystery to most people, so what is the truth about this burning "Gate of Hell" crater ?

30 meters deep and 70 meters wide, the “Hell Gate” hole appeared when a drilling rig collapsed while prospectors were searching for natural gas, it was a mistake in estimating geological scientists in the period of Soviet rule of Turkmenistan during gas exploration, and due to an estimate error, the hole exploded under the drilling equipment .

This collapse resulted in a methane gas leak crater that for some reason caught fire, and the fire is said to have been lit for fear of the spread of poisonous gases, and although no one knows for sure whether the fire was started intentionally or unintentionally, but it kept burning Since then, for half a century.

Find bacteria living inside the hole

Helping scientists explore the existence of life on other planets

George Corones is the only person known to have descended into the center of Hell's Gate, where he led a 2013 National Geographic expedition to sample soil at the bottom of the crater. 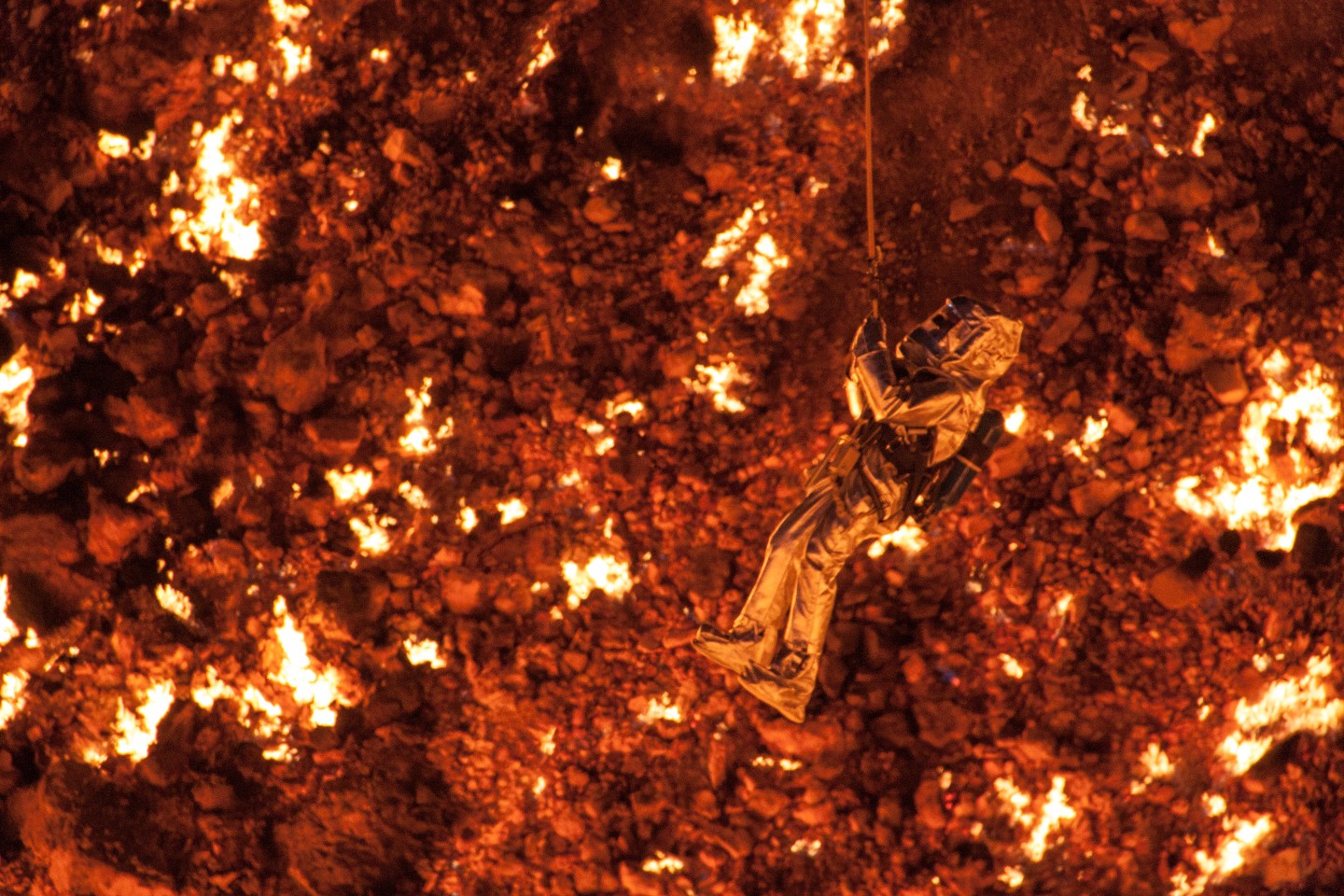 “The aim of the research was to find out if there are any bacteria that live in this harsh environment,” Corones says. “There are planets outside our solar system that have hot, methane-rich environments. If we can find microscopic bacteria living in this hole, it might give us clues.” on where we might want to look for life on other planets."

The expedition was successful, as they found bacteria living at the bottom that were not previously included in the DNA database, which means the discovery of new life inside the 'gate of hell'.

Some of the life forms discovered were metabolizing using the methane gas found in the crater, through a process known as chemical synthesis instead of photosynthesis, so that organisms obtain energy from methane gas instead of the sun .

In such a lethal environment, given the extremely dry conditions in the hot crater in the middle of the desert, the National Geographic team wasn't sure if it would find the bacteria, which are usually found in humid environments, and their findings opened the doors to future discoveries. Especially on other planets.

Click here to get the free Arabia Weather app

“What we have learned is that it is possible for microorganisms to survive and even thrive in these very harsh conditions,” Corones said. "Now, when we send probes to other planets outside our solar system into space years from now, we have an idea of where to look." 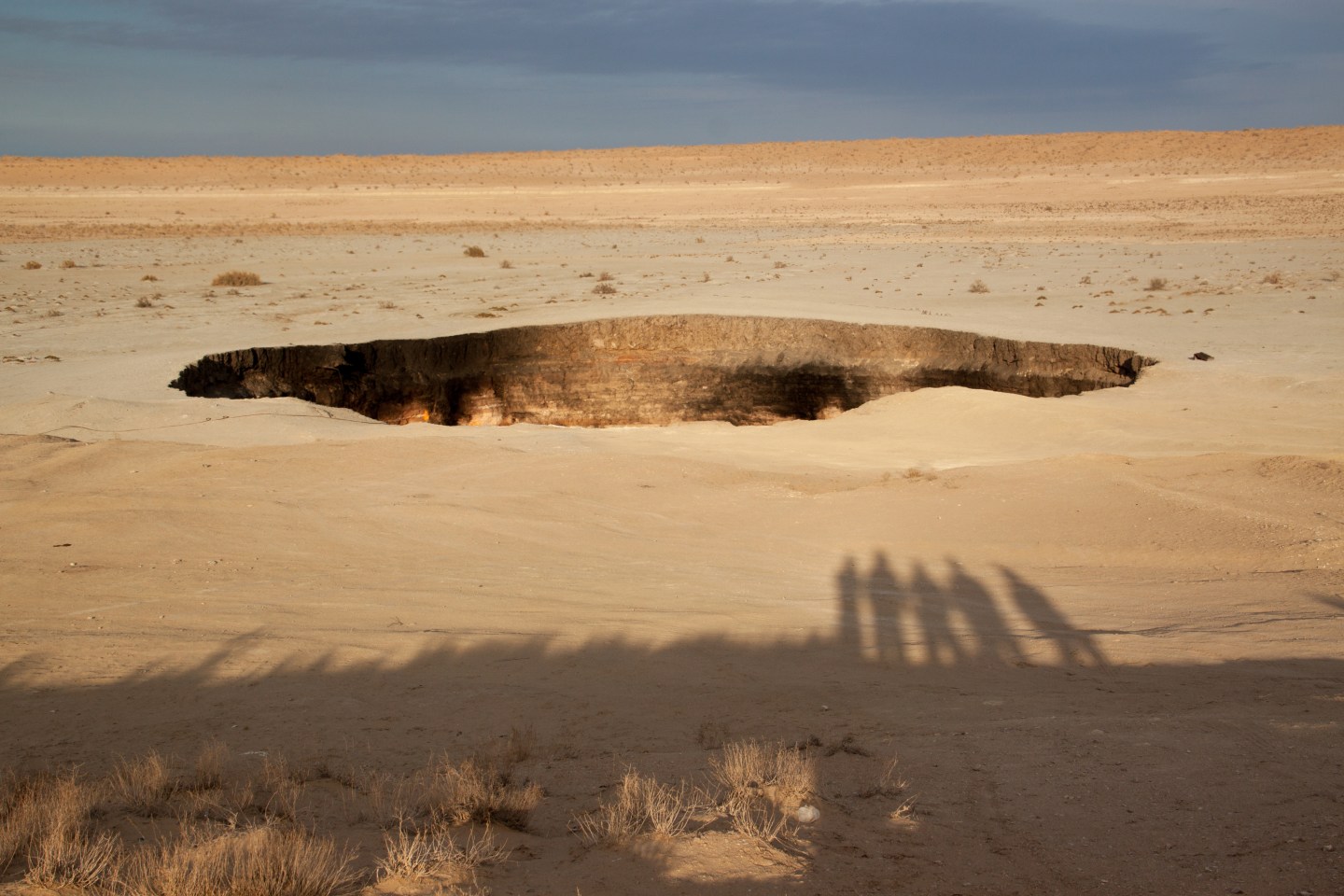 "Koronis" describes his experience inside the hole

Describing himself as a "global explorer, adventurer and storm chaser", Corones said of his experience in the crater that it felt like it was on "another planet", and although it took two years to prepare for the trip, Corones only had 17 minutes to spend at the bottom collecting samples from soil and take temperature readings. 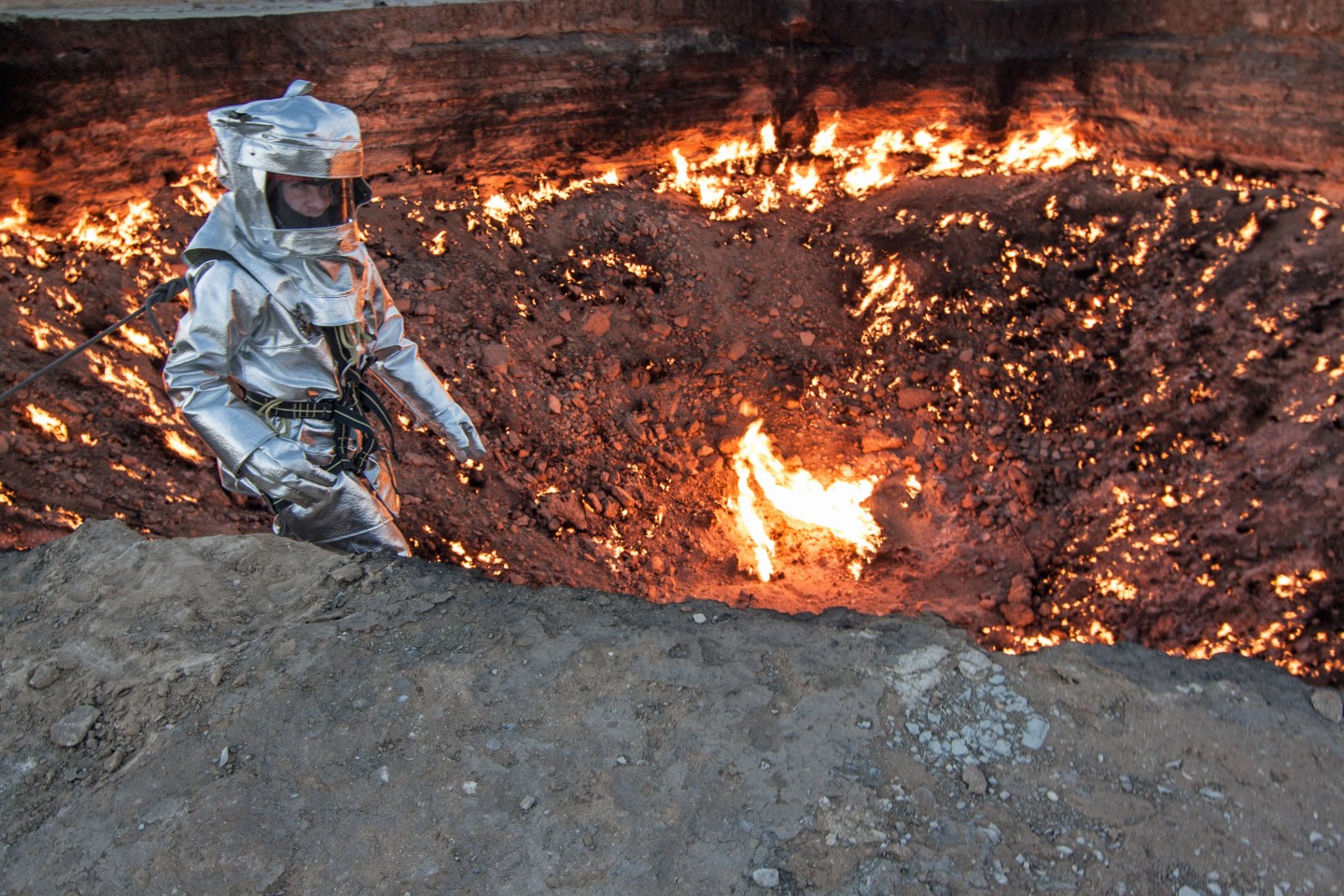 (George Koronis in a heat-resistant aluminum suit, tests temperatures at the edge of a burning gas crater in Darvaza, Turkmenistan)

He and others on the expedition team soon learned that the burning pit operated like a convection furnace, with cold air sinking to the bottom and heated there by the fire, allowing the hotter air to rise along the sides, meaning that standing even on the top edge brings in high heat. .

The highest temperature Coronis could measure while in the pit was more than 370 degrees Celsius, and Coronis described the sounds of fire in the crater as the roar of an aircraft engine, not the crackling of a campfire.

Before Corones arrived in the country, he did some rehearsals while in his native Canada, Corones said, "I actually hired a skilled guy to set me on fire like you see in a Hollywood action movie." "It was so I could get used to the idea of being close to a fire without panicking." 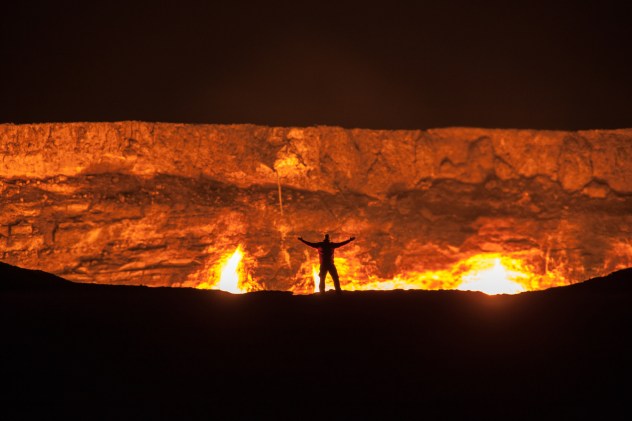 Will the fires in the pit be extinguished?

After the crater has been constantly burning for more than 50 years, it is not clear if or when the fire will be extinguished, but according to meteorologists, the weather is unlikely to extinguish the flames naturally.

The pit is underground and it is large enough that the weather has no effect on it, the temperature is very high for most of the year in the Turkmen desert, and there is seldom any rain.

Even in the rare cases where rain falls in the arid desert, the rain does not extinguish the fiery crater, and according to Coronis, due to the intense heat of the crater, the rare rain does not hit the crater itself, but rather falls in the surrounding area, and any rain that falls directly on the crater evaporates from degrees Extremely high temperature. 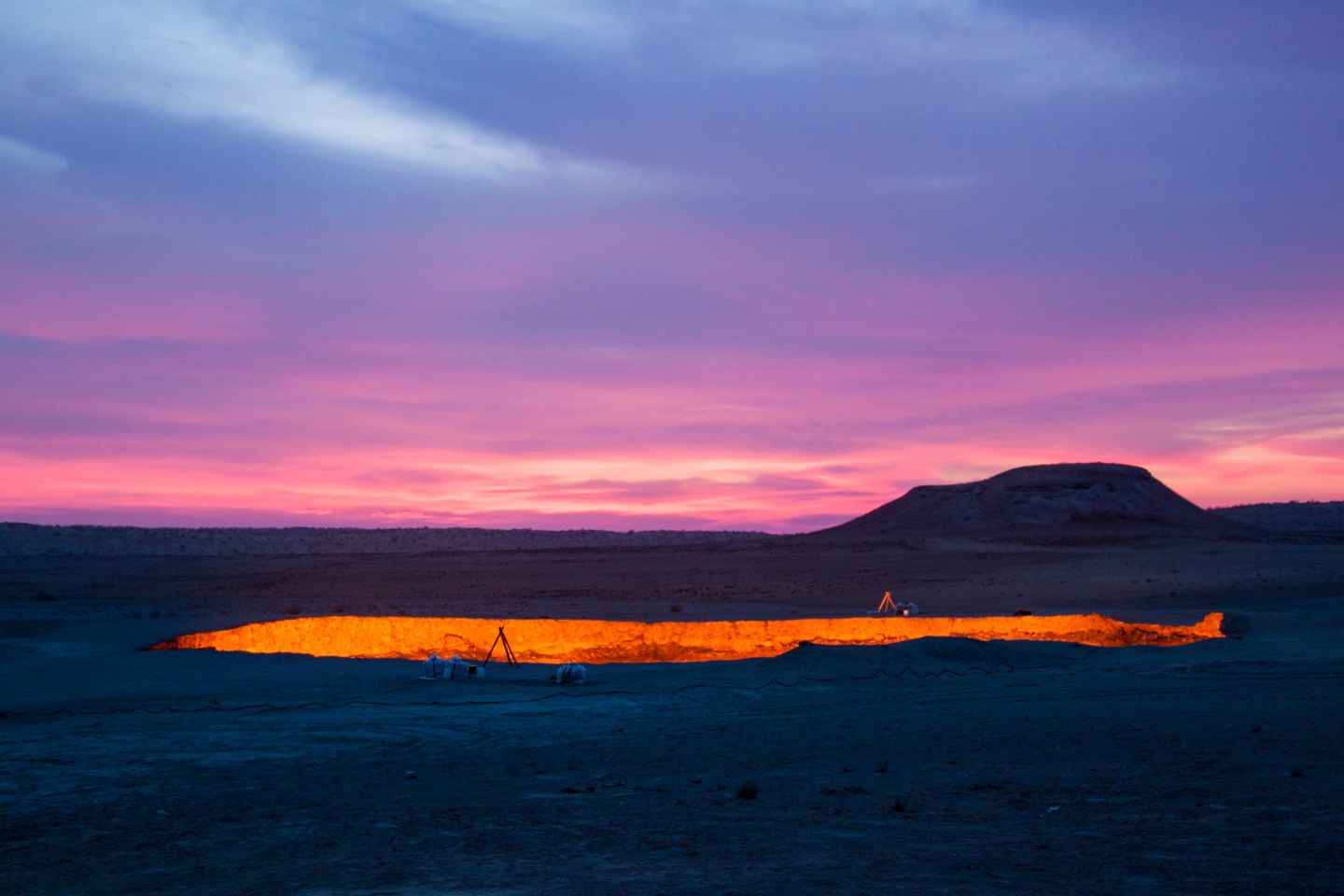 The region has a unique ecosystem despite the harsh conditions

Despite the harsh weather conditions in the "Hell's Gate" crater region, the crater created what Coronis called "a unique ecosystem found nowhere else on Earth".

He said, "At night, we were camping around the hole and we saw flocks of birds flying over the hole, they even approached in the hole." "We discovered that the birds were chasing moths and other insects that were attracted to the firelight at night."

A burning gas crater in Darvasa at dawn. The light from the crater shines dust into the air above the crater. (Photo: George Koronis)

Because of the strict nature of the government running Turkmenistan, applications from those who tried to enter the "Gate of Hell" were denied, and Koronis is the only person to reach the bottom - even holding a 2013 Guinness World Record for the achievement.

Since then, the Gates of Hell has become Turkmenistan's biggest tourist attraction and is now surrounded by fences and camping sites. Before the National Geographic team's expedition, the crater area was a barren site, surrounded only by desert.

"The place is very beautiful and I found it as a hypnotist at night," Corones said. "And this beacon of light, it lights up the whole sky at night." 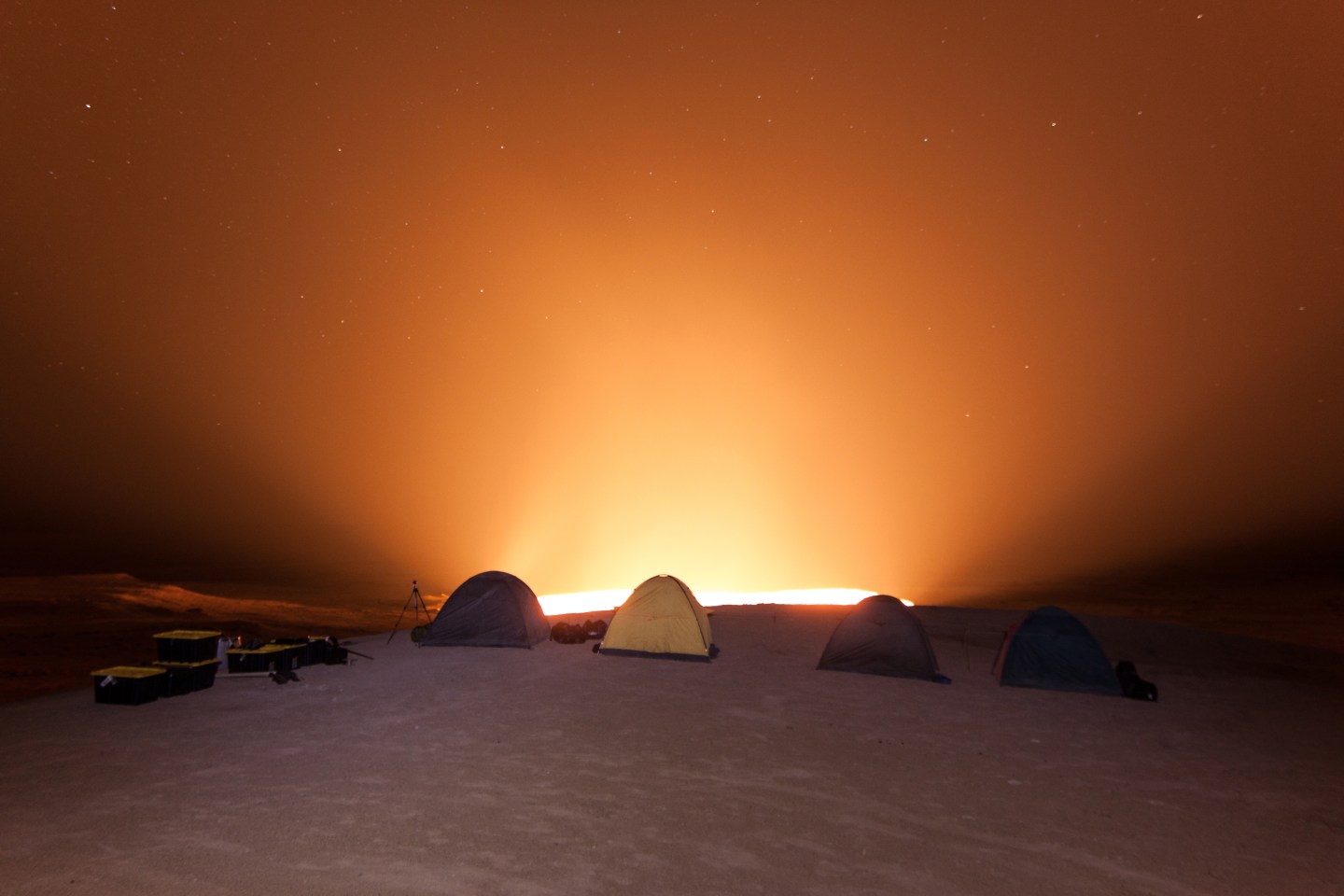