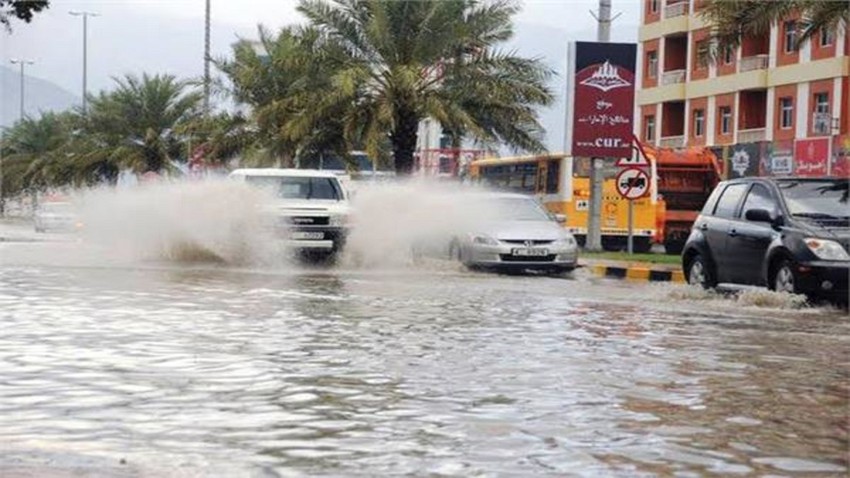 Weather of Arabia - The National Emergency Crisis and Disaster Management Authority announced today, Thursday, during a media briefing on the exceptional weather conditions prevailing in the country, that the UAE was exposed to a weather condition that affected the various emirates of the country and was accompanied by rains of different intensity, affecting many homes, services and roads.

She added that all concerned authorities and teams in the emergency, crisis and disaster system took all necessary measures to ensure the safety and health of everyone living on the country's land, during the weather situation.

The National Emergency, Crisis and Disaster Management Authority confirmed that to support the infrastructure system in the areas affected by the weather, the concerned authorities have formed field work teams to deal immediately with any effects that may result from the weather situation.

She stressed that the emergency and crisis system in the UAE is characterized by its high readiness and flexibility, as it always works according to a proactive strategy based on forecasting all expected and unexpected scenarios, with the aim of ensuring everyone's readiness and harnessing all national capabilities.

The National Emergency, Crisis and Disaster Management Authority reassured everyone that all national teams are working in full swing to provide maximum protection for all residents in areas affected by the weather condition. She also stressed that the safety of life is a top priority for all responders in the national system for emergency, crisis and disaster management.

She added that coordination has been made to provide equipment and water tanks to the affected areas. The National Emergency Crisis and Disaster Management Authority monitors developments in the weather and ensures the readiness of all plans and strategies through its centers in the various emirates of the country.

The National Emergency, Crisis and Disaster Management Authority confirmed that monitoring and follow-up operations are continuous and around the clock to follow up on all events, warn of any expected risks and develop all possible and safe solutions in order to ensure the safety of society in all its categories.

The National Emergency, Crisis and Disaster Management Authority praised the role of all national and local authorities that work and contribute to containing the repercussions of the weather situation, through continuous monitoring and tracking operations.

She stressed that all authorities at the national and local levels continue to follow up and monitor the weather situation, follow up on its changes, and ensure that all preventive measures are taken to ensure mitigating its impact on various regions.

Efforts of the Ministry of Community Development

The National Emergency, Crisis and Disaster Management Authority praised the efforts of the Ministry of Community Development, which, since yesterday evening, Wednesday, has been sheltering families affected by rain and torrential rain in the eastern regions of the country .

In addition to coordinating with more than 20 hotel establishments, to provide so far 827 housing units with a capacity of more than 1,885 people in the various emirates and regions of the country.

The National Authority for Emergency, Crisis and Disaster Management also announced the provision of buses belonging to the Ministry of Community Development, which, in addition to the many means of transportation available in the affected areas, would accelerate the transportation of families and ensure the safety of all their members. And provision of 56 buses ready in the event of any developments that require an increase in the number.

She pointed out that the Ministry of Community Development manages a number of registered, trained and qualified volunteers in the "National Volunteering Platform" who are making unremitting efforts to organize the process of transferring and serving the affected families.. These volunteers work in 3 vital and important areas, namely:

For his part, Brigadier Ali Al Tunaiji, the official spokesman for the Ministry of Interior, addressed the most important procedures followed by police leaders from the Fujairah Police Operations Center and the national response efforts, in coordination with the local level, to ensure the safety and security of lives and preserve property.

He reassured everyone that despite the heavy rains and fluctuations in the weather that resulted in the flow of torrents and valleys in a number of areas in the country, and the rain raided a number of residential houses, but praise be to God; No casualties or serious injuries were recorded, and the damages were limited to material losses only.

He added that these qualified teams are working with a sufficient number of mechanisms, and the police, rescue and ambulance teams are making continuous efforts to secure and protect individuals and property and ensure the smooth flow of traffic through field patrols, as 870 people were rescued in the Emirates of Sharjah and Fujairah.

The National Emergency Crisis and Disaster Management Authority stressed the importance of driving with extreme caution, and staying away from water courses, torrents and rugged areas such as mountains. It also called on the honorable public to adhere to the instructions and instructions of the concerned authorities, to exercise caution, adhere to safety requirements and not leave unaffected homes, especially in areas that witness heavy rain except for necessity.

The scientific reason behind the exceptional weather situation in the Emirates

For its part, the National Center of Meteorology confirmed that it is aware, through analysis of weather maps, data, and follow-up of satellites and the radar network deployed in the various emirates of the country, in an immediate and timely manner, on all developments in this weather situation.

The National Center of Meteorology added that the technical team of the center works around the clock to monitor the weather and continue to issue the necessary reports and warnings, and send information and share it with the concerned authorities to take measures and precautions and coordinate among them to deal with any possible effects on the regions of the country for this weather condition.

He explained that there was an extension of an upper and surface air depression from northern India through southern Pakistan towards the country, coinciding with the movement of the orbital convergence line towards the north of the Arabian Gulf, which worked on the flow of clouds from the Sea of Oman towards the country, interspersed with rainy cumulus clouds accompanied by lightning and thunder sometimes.

The National Center of Meteorology added that as a result of the presence of the eastern mountains, it led to an increase in the development of convective clouds, which was accompanied by heavy rains in the east of the country. Noting that the highest amount of rain recorded during this case was 234.9 mm in the port of Fujairah, and this amount is considered the highest during the past 30 years in July.

The National Center of Meteorology confirmed that it follows the weather situation around the clock, and the center calls on the public to follow the bulletins and reports issued by it, and please follow the instructions and warnings from the competent authorities.

He pointed out that, based on continuous follow-up and real-time monitoring of all weather conditions in the country, the center issued the first weather report on the weather on July 23, explaining its causes and potential effects on the country to all relevant state agencies.

The National Center of Meteorology added that 20 warnings were issued from the beginning of the situation, 70 alerts on social media, in addition to various media. Constant communication with the concerned authorities to coordinate and deal with all antiquities quickly and professionally, as preserving the safety of people and property is a top priority.

He called on members of society, in such weather conditions, to follow the news and information broadcast by the center on all its electronic platforms and through social media, and to make sure not to be drawn into any rumors circulated about weather conditions and to obtain information from its official sources.

The National Center of Meteorology also called on everyone to be vigilant in such weather conditions and to stay away from valleys and dams in areas identified by the concerned authorities to avoid any undesirable events, wishing safety for all.