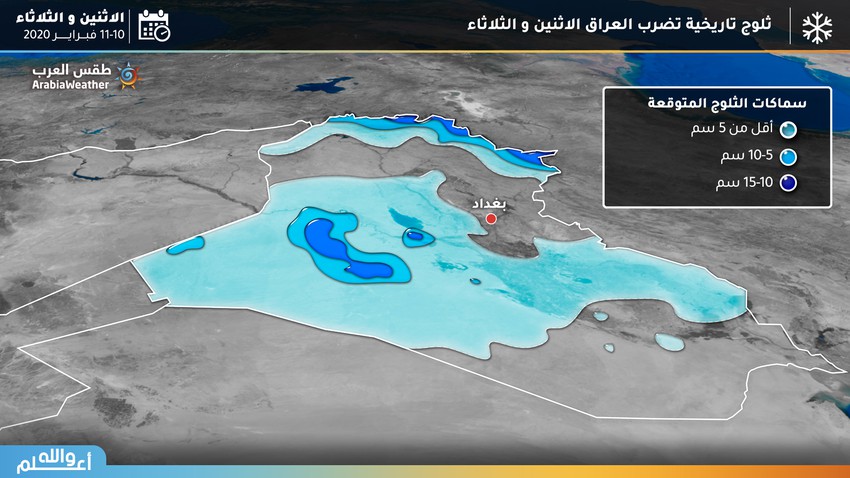 Weather of Arabia - The influence of the cold polar air mass reaches its climax this night (Monday-Tuesday night) and Tuesday night in Iraqi territory, as it is expected that this polar mass will be stationed directly over Iraqi soil.

This causes a sharp drop in temperatures in most parts of Iraq, God willing, including the Iraqi capital, Baghdad. With late hours on Monday evening, the opportunity to gradually snowfall in Anbar province is expected to be created, extending gradually eastward with the midday of the night to parts of Baghdad, Karbala and Babel in addition to the western parts of Wasit and the southern parts of Salahuddin. And it is not excluded that some snow showers will also extend to parts of Diyala and Al-Qadisiyah at dawn and on Tuesday morning.

And it will not be surprising that some snow has accumulated in some neighborhoods of these areas, including some of the capital's districts of Baghdad, and it will undoubtedly be a historical sight if the Iraqi capital Baghdad woke up on Tuesday morning on a snowy white rug. Moreover, temperatures are expected to reach below zero degrees Celsius in most regions of Iraq as well as the capital in an atmosphere described as cold, especially with night hours.

It is noteworthy that the last time it fell in the capital, Baghdad, was in January 2008, when it fell for a short period and that population noticed, but it is believed that the last time it fell snow and accumulated on the Iraqi capital Baghdad was in the early twentieth century, specifically in the year 1902 as Historians mention, so if snow falls tonight and tomorrow dawn and accumulate in the capital Baghdad, this will be a historical event.

Syria Expected rains in the north and west of the country ... and warn of the formation of torrential rains

Iraq | 30 new cases of coronavirus were recorded, with a total of 1,232 infections

Iraq | An air depression at the end of the week ... and heavy torrential rains in Iraq, `Kurdistan`

Saudi Arabia 355 new HIV cases were registered, with a total of 3,287 infections