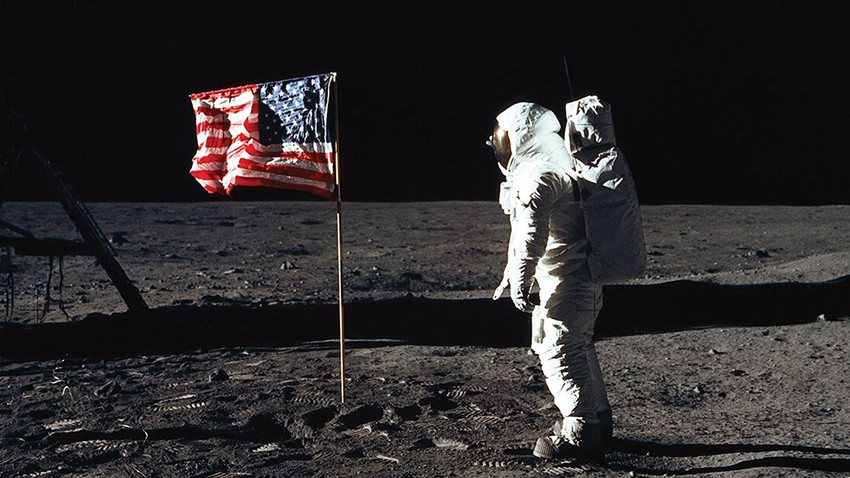 Weather of Arabia - After NASA succeeded in landing on the moon in 1969, the event has occupied wide discussions that question the achievement for more than half a century so far, and one of the evidence that the conspiracy theory cites is the flutter of the American flag on the surface of the moon, even though it is an air-free environment!

Landing the first two men on the moon

52 years ago, astronauts Neil Armstrong and Buzz Aldrin succeeded in landing on the moon as part of NASA's Apollo 11 mission, and to celebrate the huge achievement, astronauts were instructed by President Richard Nixon, to put an American flag on Moon in honor of every American who contributed to the Apollo program.

However, the planting of science in the following years attracted an incredible amount of skepticism and scrutiny, leading conspiracy theorists to question whether NASA actually landed on the Moon. One of the leading conspiracy theories denouncing NASA's achievements claims that the flutter of the US flag in the vacuum of space is evidence that the moon landing was a hoax.

Where the red and white cloth of the American flag seemed to move as if it were in the wind, if there was no atmosphere on the moon, how could the flag flutter like that?

Could this be evidence that the pictures of the moon landing were filmed in a Hollywood studio or in an unknown location in the deserts of the American state of Nevada?

According to the British National Space Center in Leicester, the American flag never really flew on the moon, and that the flag's apparent movements were caused by the astronauts themselves rather than by the wind.

The space center explained: “The flag where it was planted on the surface has maintained its curved shape due to the lack of strong gravity on the moon. In a video of the flag, it also appears to be waving back and forth, and this is because when the astronauts were planting it, they rotated it back and forth to dig better In the lunar soil, which made the flag wave like a pendulum."

NASA commented on the deceptive accusations, saying, "When astronauts planted the flagpole, they rotated it back and forth to better penetrate the lunar soil - anyone planting a blunt pole would know how."

In order for the American flag to stand upright in the airless environment of the moon, a horizontal arm was placed along the top of the flag to stabilize it. Sometimes astronauts don't fully extend that arm, so the flag won't appear flat. This would leave some ripples in the fabric, making the flag appear in the pictures as if it was fluttering in the breeze, and the zigzags were there because the cloth was tightly wrapped for four days during the journey to the moon."

Until the late 1970s, Jack Singal, a professor of physics at the University of Richmond, explained that moon landing plots were not as common as they are today. The spread of the conspiracies is widely attributed to Bill Kissing, a former engineer who published the 1974 book We Never Went to the Moon.

What happened to the Apollo 11 flag 50 years after it was planted?

After the Apollo 11 mission, NASA planted five more flags on the Moon, some of which still stand today. Lunar satellite imagery shows that the flag of Apollo 11 has likely fallen, but the mast of Apollo 12, Apollo 16 and Apollo 17 are still upright.

However, the effects of strong cosmic radiation likely caused the flags to turn white.

Fast facts about the moon: