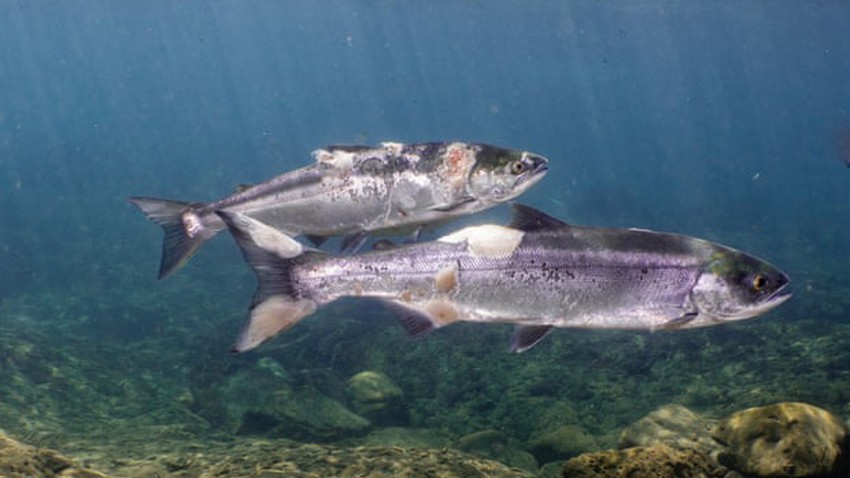 Weather of Arabia - A shocking video has spread documenting the damage that heat can do to fisheries, as the video was documented after a heat wave in the northwest Pacific Ocean on a day when water temperatures exceeded 21 degrees Celsius, and the video shows salmon infection with sores and white fungi throughout his body.

The video, published by the non-profit organization Columbia River Keeper, shows a group of sockeye salmon swimming in a tributary of the Columbia River covered with ulcerated red spots and white fungus from heat stress in warm waters, in the wake of the record-breaking heat wave. In the Pacific Northwest.

Brett Vanden Heuvel, CEO of Columbia River Keeper, explained that salmon were traveling upstream in the Columbia River from the ocean, back to their spawning grounds, when they unexpectedly changed course.

Salmon drifted into the Little White River, a tributary of the Columbia River where the video was recorded, in an attempt to escape the warm waters (21 degrees Celsius), which is deadly heat for these fish if exposed for long periods. The Clean Water Act prohibits the Columbia River from rising above (20°C).

This is unfortunate because the salmon shown in the video will not be able to reproduce in the tributary to which it has moved, and is expected to die from disease and heat stress.

This scene is yet another example of the tragic toll of the recent heat wave, which killed hundreds of people across the Pacific Ocean northwest of Canada, may have killed more than a billion marine animals, and contributed to fires across the region.

Brett Vanden Heuvel said it was too early to say how many salmon died in the hot water. But there are still tens of thousands of salmon in the Columbia and Snake Rivers, so as these waterways heat up over the next couple of months, many fish could die. This can have dire effects.

It is heartbreaking to watch animals die abnormally, and even worse, this is a man-made problem.