How did the Jordanians interact with the recent depression? 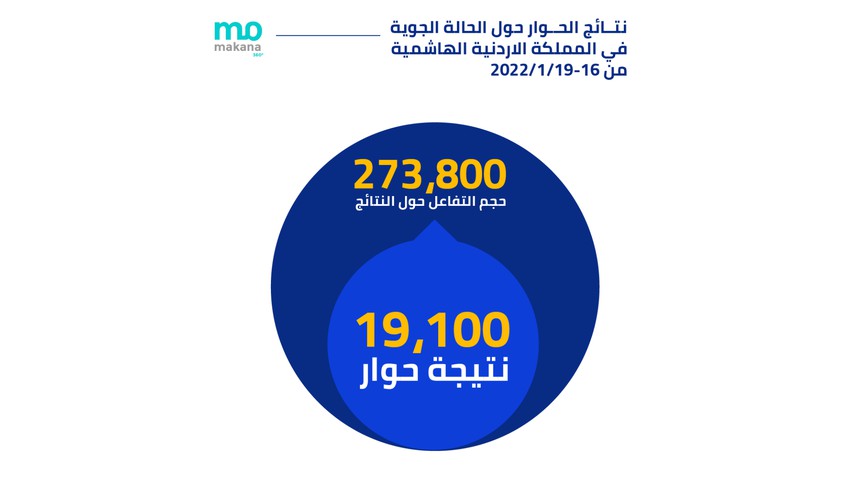 Weather of Arabia - Makana 360 polling and marketing company (Makana 360) conducted an analytical study of the dialogues of Jordanian citizens on their pages on social networking sites and websites and their interaction with the atmospheric depression that affects the Kingdom currently, as about 19 thousand dialogues and 273 thousand interactions were analyzed during the period from Between January 13-19, 2022.

Through Makina 360’s analytical tools that rely on artificial intelligence and Natural Language Processing (NLP), a type of artificial intelligence that specializes in analyzing huge text groups, which are used in marketing, reputation building, and audience and consumer behavior analysis, the most prominent results of the study were as follows:

Availability of goods and food

It is a strategic communication consulting firm that relies on big data to build media and communication plans, provides services to clients that help them understand the customer journey, and provides data-driven methodologies that enable you to better achieve your business goals.

Makana 360 announced at the end of last year that it had signed an official partnership agreement with the world’s largest digital analytics and listening company, Talkwalker, which will enable Makina 360 to provide comprehensive additional services that start with analyzing the market and audience sentiments based on their behavior and impressions, building specialized in-depth reports and analytical research in All government and commercial sectors and organizations, and the company builds and links media and communication strategies with data and then builds the media narrative, which is called data-based communication.