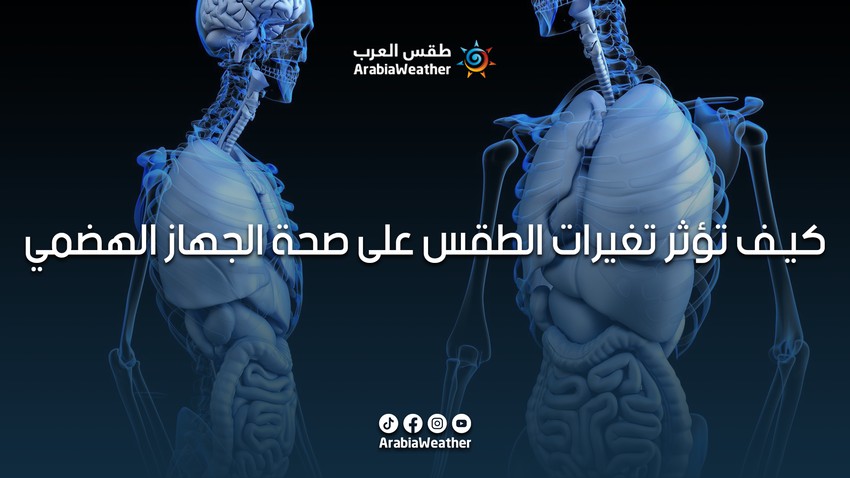 Arab weather - human health is affected by external factors such as weather and temperature changes associated with changing seasons, and in fact some diseases and their symptoms are linked to certain times of the year, so colds spread in the winter, and joint symptoms intensify when temperatures drop, while allergy symptoms worsen in the spring Symptoms of multiple sclerosis for patients with it in the summer. The digestive system is often the first victim of the vagaries of weather and seasons.

The cause of weather-related digestive disorders may be due to the difference in human immunity and susceptibility to disease with different seasons and temperatures. It is a time when trips and outdoor picnics abound, when food is sometimes exposed to temperature fluctuations, which leads to spoilage. It is also easy to get dehydrated at this time of the year, especially when exercising excessively.

It is recommended to eat small meals more than once throughout the day to prevent indigestion, and you can start with your favorite food in the case of social events and picnics.

Slow down while eating

Eating food quickly and not chewing it well leads to bloating, a feeling of discomfort and satiety, due to not realizing the amount of food eaten, so you must slow down while eating, chew well, and communicate with family and friends while eating, and food can be divided into small pieces and chewed each Well.

If you exercise for more than 45 minutes, it is important to wait an hour before eating, to allow blood to travel from the muscles to the stomach, to begin to digest the food well.

It is advised to maintain a daily routine of exercise for a period of no less than twenty minutes a day, as studies have shown that sports strengthen the immune system to fight various diseases, relieve stress and psychological pressure, and reduce the duration of colds.

High temperatures in the summer cause an increase in the proliferation of bacteria in food, which may lead to a lot of common food poisoning in recent times, of which diarrhea, vomiting, and headaches are among the most important symptoms, so you should keep refrigerated foods cold in regular refrigerators or Mobile devices designated for picnics, and hot foods intended for immediate consumption are heated in containers, and consumed within a time not exceeding two hours. Food subject to spoilage may not be kept for more than two hours at room temperature.

To prevent bloating, gas, and symptoms of satiety that may accompany weather and temperature fluctuations, it is recommended to avoid and reduce the following foods:

Fatty foods : such as fried foods, and cheeses, which are foods that require a longer time to digest and increase the chance of heartburn.

Food and soft drinks : such as soda, and beans.

Acidic foods : such as citrus fruits, tomatoes, tea, and coffee, which all cause heartburn.
Drink enough fluids

It is recommended to drink sufficient quantities of water and fluids during periods of weather fluctuations and temperature changes, to prevent dehydration that may be accompanied by constipation, in addition to nausea. .

The period of changing temperatures and weather fluctuations is accompanied by the spread and reproduction of germs, so hands must be washed well upon arrival at home, and before eating.

Tips for dealing with indigestion related to changing weather

Eat food and herbs that relax the stomach

Strong odors such as strong food odors, perfume odors, and the smell of cigarettes can irritate the stomach.

Avoid anything that irritates the stomach

You should stay away from anything that irritates the stomach in the period when the body is prone to digestive disorders, such as excessive coffee, tea, alcohol, or herbs.