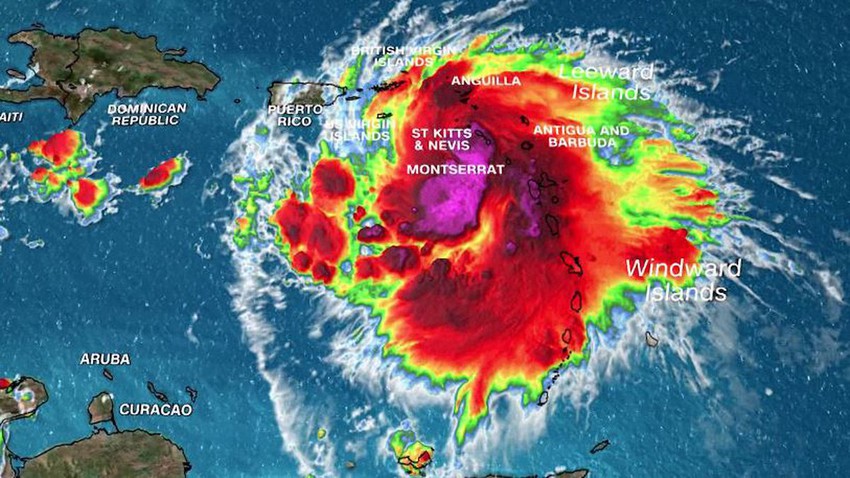 Weather of Arabia - Hurricane Fiona hit parts of Puerto Rico today, Monday, leading to power outages in several areas and the occurrence of landslides and widespread flooding as the storm moved west towards the Dominican Republic, while President Joe Biden declared a state of emergency on the American island.

The entire island of Puerto Rico is without power as Hurricane #Fiona slams into the island with violent winds over 100 mph and catastrophic flooding.

Now nearly the entire island is under a flash flood warning.

“It's completely under water.” Puerto Rican pilot Carlos Benitez says as he flies over the town of Toa Baja, a municipality that sits along the northern coast of the island.

In addition to the complete power outage for the 3.3 million people living on the Caribbean island, some health centers running on generators were also affected. The health minister said the electrical systems at the San Juan hospital complex have since been restored, but in some areas, it will take days to reconnect power, the island's operator Luma Energy said.

The category 1 storm hit with strong winds (140 km/h). No deaths were reported in Puerto Rico, but one person was killed on the French Caribbean island of Guadeloupe when his home was swept away by floods.

Ports in Puerto Rico were closed and flights from the island's main airport were cancelled.

Many roads were also closed and a highway bridge was washed away by floods in Ottoado, in the central mountainous region of the island.

Hurricane Fiona hit Puerto Rico only five years after Hurricane Maria - the worst in the island's history - which caused widespread destruction, especially in infrastructure, where electricity was restored to only about 10% of the population three weeks after the disaster, and the national grid is still fragile, With daily power outages.

Heavy rain and mudslides are also expected in the Dominican Republic as the hurricane advances to the northwest, the Turks and Caicos Islands, and parts of the southeastern Bahamas are also likely to be affected by early Tuesday.

Hurricane Fiona is the third of the 2022 Atlantic hurricane season and is expected to become a Category 3 or higher storm -- in about 48 hours, east of the Bahamas.

The Bahamian government has issued a tropical storm warning for the Turks and Caicos Islands and the southeastern Bahamas, including Acclins, Crooked Island, Long Cay, Inagos, Mayaguana and Roughed Islands.