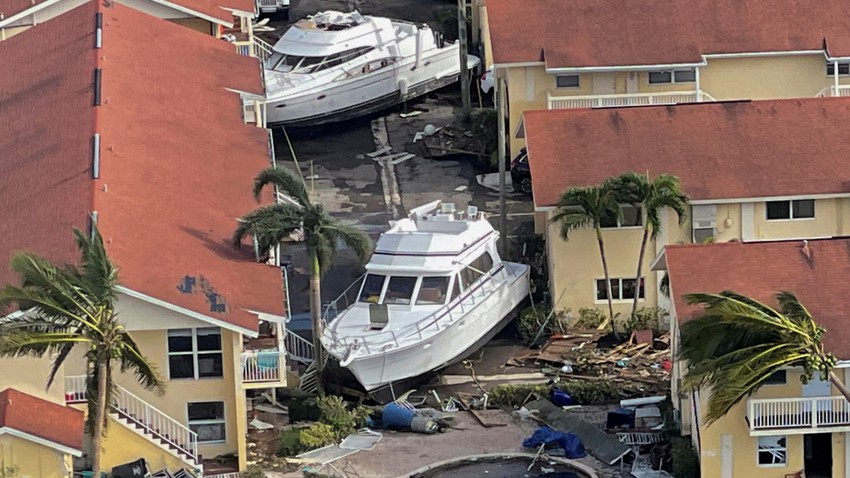 Weather of Arabia - Dozens of Florida residents left their flooded homes, while rescuers on Saturday continued to search for survivors among the homes destroyed by Hurricane Ian in Florida, while authorities and stunned residents in North and South Carolina began assessing the losses and damage caused by one of the most powerful Hurricanes that have ever hit the United States.

"Ian" frightened millions most days of the week, striking western Cuba before crossing the coast of the US state of Florida from the Gulf of Mexico to the Atlantic Ocean, and then mobilizing a final attack on the Carolinas. Even double on Saturday in the mid-Atlantic.

As the death toll continued to be counted, the death toll rose until Sunday (October 2) to 81 deaths in Florida, four in North Carolina and three in Cobb, most of them drowned, and others died from the tragic effects of the hurricane, as happened with an elderly couple who died after the oxygen machines stopped With the power outage, with the mayor's office in coastal Lee County counting 42 deaths in the county that bore the brunt of the storm when it made landfall, officials in four neighboring counties recorded 39 more deaths.

Here are horrific scenes of the devastation caused by Hurricane Ian:

As of Saturday, more than 1,000 people have been rescued from flooded areas along Florida's southwest coast alone, General Daniel Hokanson, head of the National Guard, told The Associated Press as he was flown to Florida.

River flooding posed a major challenge to rescue efforts and the delivery of supplies, as the Miaka River flooded closed a busy highway on Saturday that connects Tampa to the north with the hard-hit Southwest Florida region that runs between Port Charlotte and Fort Myers, cutting off supplies to those affected.

While rising waters in Florida's southwestern rivers have peaked or are nearing their peak, the rise in water levels is expected to continue for several days, National Weather Service meteorologist Tyler Fleming said in Tampa.

South Carolina's Pawleys Island, a beach community about 73 miles (117 kilometers) on the coast from Charleston, was among the places hardest hit by Ian, as 25-foot (7.6 meters) waves washed up boats and the famous pier. In the area, it is one of at least four piers along the South Carolina coast that was destroyed by the winds and rains associated with Hurricane Ian.

In North Carolina, the storm killed at least four people, brought down trees and major power lines, leaving more than 280,000 people across the state without power Saturday morning, officials said.

North Carolina officials said separate car crashes killed two people in the storm, a man drowned when his truck fell into a pool of water, and another man died of carbon monoxide poisoning from a generator in a closed garage.

The storm's winds were much weaker on Friday than during Ian's sweep of the Florida Gulf Coast earlier. The authorities and volunteers there are still assessing the damage while shocked residents try to comprehend the loss and devastation caused by the disaster.