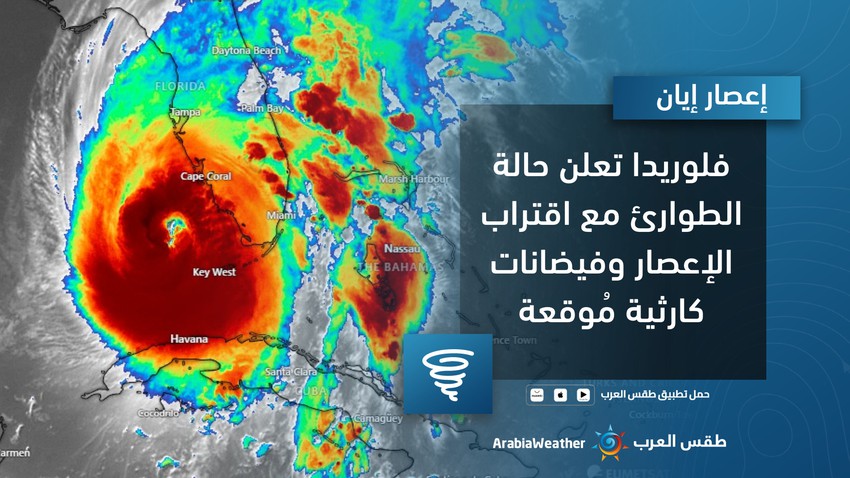 Weather of Arabia - The residents of the American state of Florida are preparing with great concern for strong waves, catastrophic floods and strong winds expected with Hurricane "Ian" approaching, after it has already swept western Cuba and is expected to intensify before it reaches land in Florida.

Our latest satellite images at the Arab Regional Weather Center indicate that Hurricane Ian was concentrated over the waters of the western Gulf of Mexico near the US state of Florida, and it is now classified as a third-degree according to the "Sversimson" scale to measure the intensity of hurricanes, and the hurricane is accompanied by winds of up to 193 km / h.

It is expected during the hours of this evening, Wednesday, that the hurricane will continue to move westward over the waters of the Gulf of Mexico and draw more energy through the warm waters of the Gulf, which have a temperature of 30 degrees Celsius, in addition to attracting more moisture that makes it vulnerable to developing to the fourth degree before it begins to enter towards the state of Florida and includes coastal cities Like Cape Coral, Sanibel and Naples, they bring with them high winds and torrential rains that make Florida vulnerable to floods and landslides, as well as searing waves in coastal areas.

The Tampa Bay area, home to more than three million people, is among the most vulnerable places in the United States to severe flooding, and the area could see the first direct hit of a major hurricane since 1921, nearly 100 years since Tampa was hit directly, and more Rising sea levels and increasing population now risk a catastrophic tidal wave.

How is Florida preparing for Hurricane Ian?

Ian is likely to lose speed as he approaches Florida, effectively extending the storm's effects and threatening up to 20 inches (1.6 feet) of rain in some areas, with significant damage expected if it hits Tampa, one of the most densely populated areas in the world. the state.

Over the past 50 years, residential areas along the Tampa area have expanded nearly (11,200 km) to the shoreline, and this proximity to sea water increases the risk to residents and facilities, as more than 2.5 million Florida residents have begun Coastal evacuations, with police going door-to-door in some areas and urging people to leave their homes. Tampa Bay Mayor Jane Castor said Tuesday that the city will also implement a curfew for remaining residents.

While "NASA" postponed the launch of the moon rocket at the Kennedy Space Center.

More: Hurricane "Ian" confused NASA's calculations on its new mission to the moon

He added that nearly 60 Florida school districts had canceled classes because of the hurricane, and that more than 175 evacuation centers had been opened statewide.

The Walt Disney Company announced that it will close its water parks in Florida on Wednesday and Thursday, and the storm disrupted the energy industry in the Gulf Coast, as employees were evacuated from 14 production platforms, which led to the suspension of about 11 percent of oil production in the region, according to "Reuters".