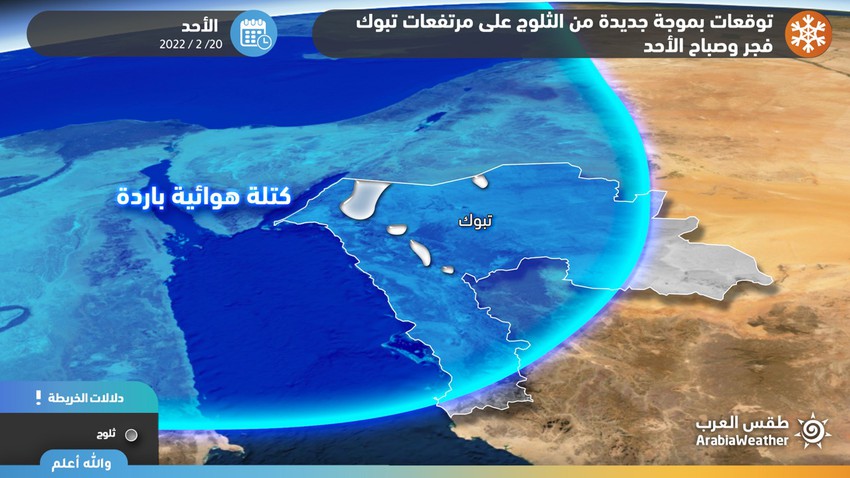 Arab weather - Sinan Khalaf - The heights of the Tabuk region are once again at the forefront of the air scene in the Kingdom of Saudi Arabia, as forecasts indicate the possibility of being exposed to a new wave of accumulated snowfalls at the beginning of the week, God Almighty.

In the details, the Tabuk region is affected by a state of atmospheric instability resulting from the convergence of the so-called Red Sea depression in the layers of the atmosphere near the surface of the earth with the deepening of a very cold air mass in the upper layers of the air, working to reduce temperatures significantly and significantly below zero degrees Celsius on the mountainous heights High altitude from Tabuk region, accompanied by showers of snow on some high mountainous heights. The chances of snow falling on the heights of Tabuk region gradually, God willing, starting from midnight Saturday/Sunday, and the snow becomes more regular and dense with the dawn and Sunday morning hours, with the possibility of accumulating on the high peaks of the Tabuk region.

The Arab weather calls on its snow-loving followers who will head towards Jabal al-Lawz, the necessity of wearing heavy clothes commensurate with the significant drop in temperatures, in addition to the need to drive carefully up and down the mountain for fear of slips.