Important | An exceptionally stormy Friday awaits the Kingdom, with serious warnings of sandstorms and dust 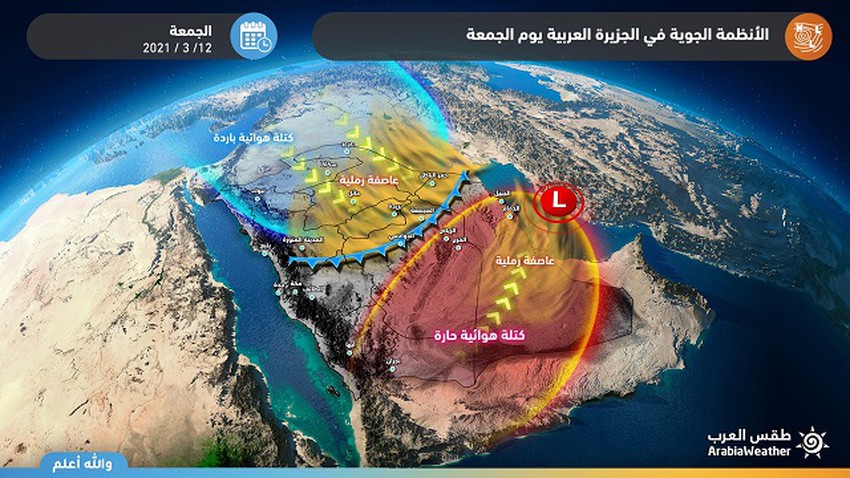 Weather of Arabia - Sinan Khalaf - is still the latest output of computer simulation systems of wind movement in a state of consensus that large parts of the Kingdom will be affected on Friday by stormy and dusty atmospheres with dense and highly likely to be the strongest sandstorm this season , accompanied by crossings of a cold air front for the region's airspace.

In the details, it is expected that the Levant region and the far north of the Kingdom of Saudi Arabia will be affected   In an air depression at the end of the week, this depression will push, after God’s will, strong winds towards all regions of the northern, central and eastern regions of the Kingdom and the east of the Kingdom, the speed of some of its gifts reaching the limits of 100 km / hour , and these winds are capable of forming wide dust waves accompanied by a significant decrease in the horizontal visibility .

As for the areas covered by the forecast of strong winds and dust, they are all from Al-Jawf, the northern borders, the Hail region and Al-Qassim, and up to the capital Riyadh, in addition to large parts of the eastern region and the coasts of the Arabian Gulf that witness turbulence in the sea and a rise in waves in addition to the dusty weather in general.

- The danger of severe winds, which may reach the barrier of 100 km / h

Arab Weather - The Australian National Council of Imams announced in a statement a short while ago, and after intensive consultations with Muslim leaders at the nation's level in Australia and their representatives, the Office of the Mufti of Austral