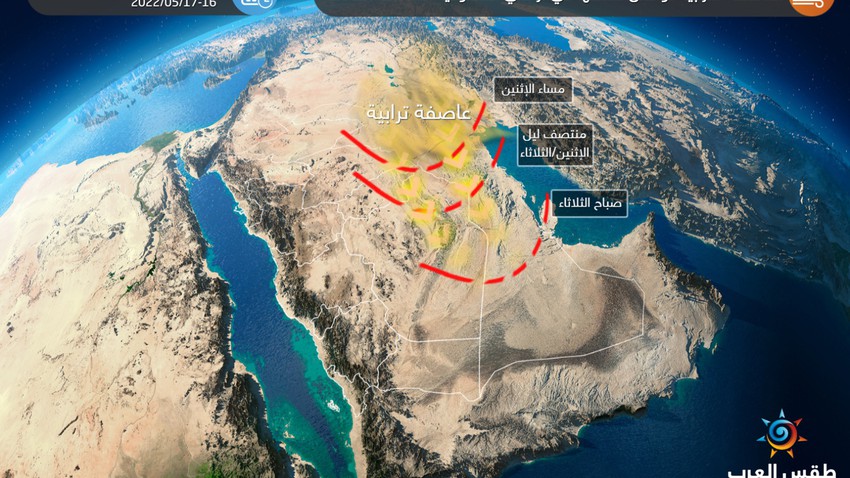 Arab weather - Sinan Khalaf - the latest output of the computer simulation systems for wind movement is still unanimously agreed that the severe sandstorm that affects Iraq, Kuwait and Hafr Al-Batin will deepen significantly in the Kingdom's atmosphere during the hours of this evening and tomorrow, Monday, to directly and strongly affect the eastern region , then the middle to a lesser extent.

In the details, it is expected that the sandstorm will continue to gradually move from Kuwait, the northern border, and the Hafr Al-Batin region towards the eastern parts of the Kingdom, starting with Khafji with the early night hours and reaching Jubail and Dammam with the late night hours and the early dawn hours, with a strong high impact, accompanied by a significant decline Unusual range of horizontal visibility for these coastal areas, may negatively affect maritime traffic, aviation and road networks. Moderate effects on Riyadh at dawn and Tuesday morning

The capital, Riyadh, will not be far from this dusty wave, as it is expected to be gradually affected during the night hours of Monday/Tuesday by the dust wave, beginning with Majmaah, then Shaqra, and reaching the city of Riyadh with moderate intensity with the dawn and morning hours of Tuesday, with surface winds active and visibility reduced. The horizontality is below 1000 m, and the intensity and intensity increases as we head east