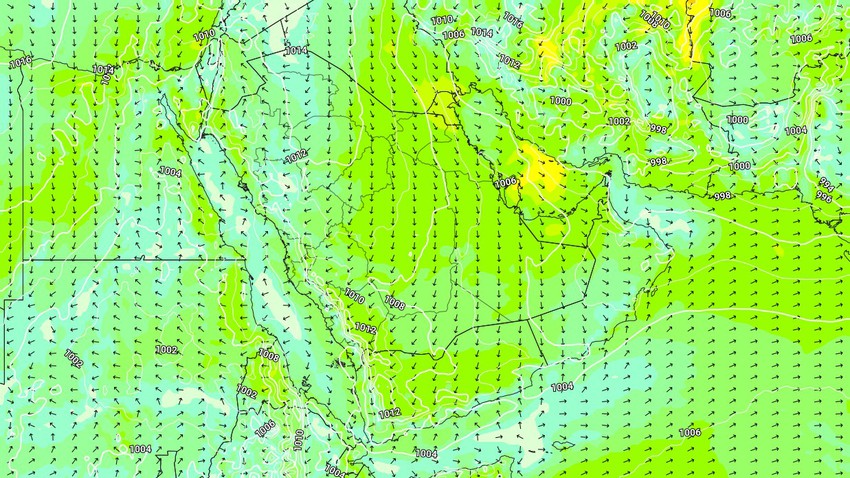 Arab Weather - The latest output of the numerical models processed by the Air Operations Department at the Arab Regional Weather Center indicates that active winds will continue to blow at speed in the coming days on Qatar, Bahrain, the Arabian Gulf and the Emirates, especially the western regions, where it is expected that the speed of the fixed winds will reach approximately 40- 50 km / h in the coming days, and it will be accompanied by strong gusts that exceed the 70 km / h barrier, and the waves will be turbulent with a height of more than one meter to one and a half meters on the beaches of Qatar and Bahrain in addition to the beaches of the Emirates, and the height of the waves in the depth reaches about 3 meters, especially at the end of the week.

Al-Bawareh winds will blow over southern Iraq, Kuwait, and eastern Saudi Arabia at the end of the week

According to the initial treatment indicators, it is expected that the Al-Bawarih winds will start early in southern Iraq and Kuwait, reaching Qatar and Bahrain, where the north or northwest winds known as Al-Bawareh will be active on those areas and accompanied by strong gifts that raise dust and dust, and may form dust waves and a decrease in the weather. Horizontal visibility.

Stirring dust and dust by the force of the wind

Active winds are expected to raise dust and dust in Qatar, Bahrain and the western Emirates, where the dust concentration will rise in these areas and the horizontal visibility may decrease clearly in some areas in the coming days, as a result of the Al-Bawareh winds blowing at the end of the week, especially in southern Iraq, Kuwait and eastern Saudi Arabia. It is expected that these areas will be affected by dust waves that may be dense.

The Arab Weather website advises not to go to the sea during the coming days, and not to sail small boats, and it is advised to pay attention to the risk of an increase in the proportion of dust and dust in the atmosphere in many countries.