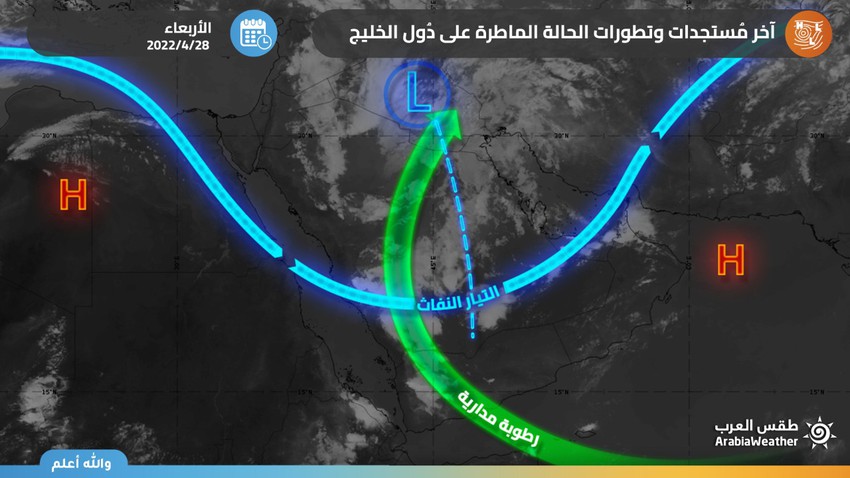 Arab Weather - Specialists in the Weather Operations Department at the Arab Regional Weather Center for Meteorology and Weather Forecasts reported that the depression will move eastward on Friday 29-04-2022, so that rainy thunder clouds will focus on the eastern, central and southern sectors of the Kingdom of Saudi Arabia, and rain opportunities will affect Bahrain and Qatar on periods. According to the center, it is expected that rain opportunities will also include the Hajar Mountains and the adjacent areas in the northern part of the Sultanate, parts of Kuwait, the south and west of the Emirates and some of its coastal areas, God willing.

According to the latest weather readings, the upper depression is centered (at the time of preparing the report) in the south of Iraqi territory and affects primarily the center of the Kingdom of Saudi Arabia, including the capital, Riyadh. It is expected that the same depression will move eastward gradually on Friday, coinciding with the continued leakage of air currents saturated with tropical moisture. Towards the Arabian Peninsula, God willing. As a result, the focus of thunderstorms activity shifts towards eastern Saudi Arabia and parts of other Gulf countries, as we will discuss in this report. 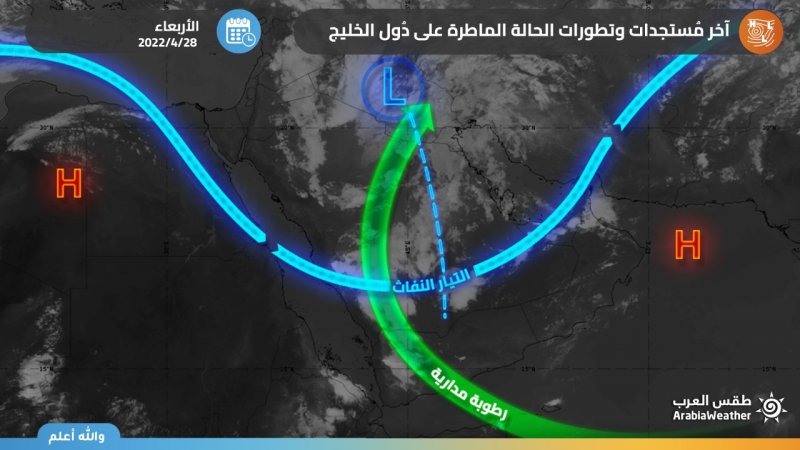 The movement of thunderclouds activity towards eastern, central and southern Saudi Arabia on Friday

The latest weather forecasts extracted from the outputs of the so-called computer simulations indicate predictions of the transmission of weather turbulence towards the eastern and southern sectors of the Kingdom and parts of the central regions. To include several parts of the Eastern Province, including Hafr Al-Batin, Dammam, Jubail, Al-Khobar and Al-Ahsa, in addition to large parts of the Riyadh region administratively, and it includes rain opportunities, the capital, Riyadh, at many periods, God willing, especially with the evening hours, in addition to the Empty Quarter desert. The rains are variable in intensity and sometimes heavy, and cause valleys to flow in some areas, in addition to being preceded in many cases by a high wind speed that may cause the formation of local dust storms.

Despite the focus of the rain on the transmission of the focus of thunderstorm activity on Friday, cumulus clouds are forming along the southwestern highlands of the Kingdom represented by parts of Najran, Asir, Al Baha and Makkah Al-Mukarramah and may extend to include the sacred feelings in a limited way again, and the rains are random and limited in nature. On parts of Hail, Qassim and the northern borders, God willing.

Rain chances extend to parts of Kuwait, Bahrain and Qatar

Weather forecasters at the Arab Weather Center have indicated that cumulonimbus thunderstorms will extend to also include parts of Kuwait, especially the western parts of it, in addition to Qatar and Bahrain. These clouds are accompanied by showers of rain that are sometimes thunderstorms, and are actively associated with the speed of downward winds in some areas, and as a result of which it is feared that the horizontal visibility will decrease.

It is expected that the chances of thunderstorm formations will be renewed in parts of the Al Hajar Mountains, especially Al-Hajar Al-Awsat and adjacent areas, accompanied by rainfall of varying intensity and activity in wind speed, and the extension of some local formations to some coastal areas of the Sea of Oman is not ruled out. This will be followed up immediately through updates, God willing.

According to the UAE National Center of Meteorology, the weather on Friday in the Emirates is expected to be partly cloudy to cloudy at times, with a chance of rain falling on scattered areas, especially the western and southern regions, extending over some coastal areas and islands, God willing.

Emirates - National Center of Meteorology | Scattered rain as of Wednesday