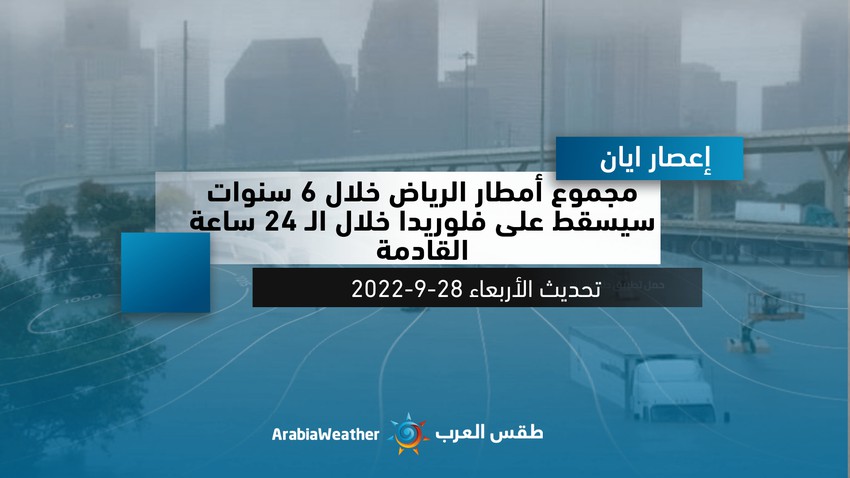 Arab weather - Sinan Khalaf - It is expected that the coasts of the American state of Florida will be affected tonight and during the next 24 hours, large amounts of rain, exceeding 600 mm, equivalent to the total that will fall on the Saudi capital, Riyadh, within 6 years, in areas overlooking Tampa Bay in particular. .

Hurricane Ian and the latest forecast for the coming hours

According to the latest reports issued this evening by the Arab Regional Weather Center, it is expected that the hurricane will continue its movement westward over the waters of the Gulf of Mexico and draw more energy through the warm waters of the Gulf, which reach a temperature of 30 degrees Celsius, in addition to attracting more moisture that makes it vulnerable to developing to the fourth degree before It begins by entering the state of Florida and includes coastal cities such as Cape Coral, Sanibel and Naples, bringing with it strong winds and heavy rains that make Florida vulnerable to floods and landslides, as well as strong waves on coastal areas.

The Tampa Bay area, home to more than three million people, is among the most vulnerable places in the United States to severe flooding, and the area could see the first direct hit of a major hurricane since 1921, nearly 100 years since Tampa was hit directly, and more Rising sea levels and increasing population now risk a catastrophic tidal wave.