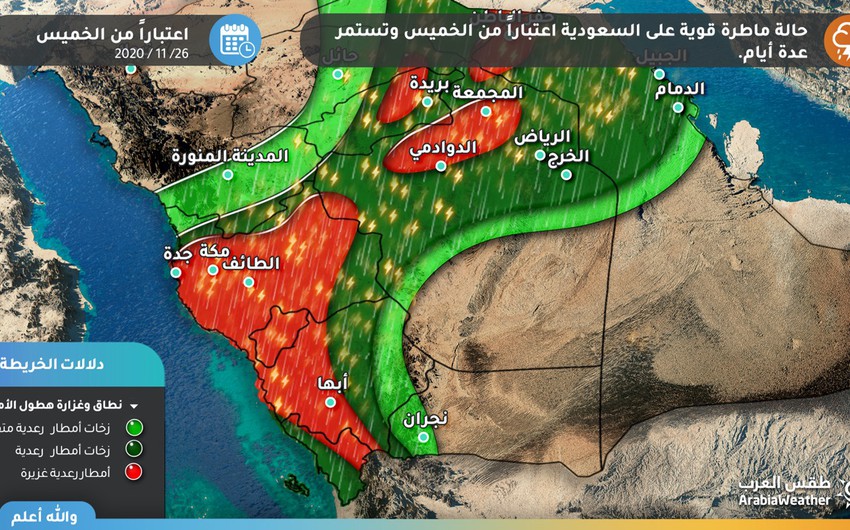 Weather of Arabia - During the expected weather conditions over the Kingdom, starting from Thursday, the city of Jeddah will be among the areas most affected by it, as the latest air updates indicate a high opportunity for the formation of strong thunderstorm clouds over the city on Thursday while crossing the cold air front coming from the northern Red Sea .

A cold air front begins to cross the middle of the Red Sea on Thursday morning, coinciding with the eruption of a warm and moist air mass from the remnants of the tropical condition that affected Somalia and the Gulf of Aden during the past few days, and strong thunderclouds form over the waters of the central Red Sea and the coasts of Jeddah and the general area Jeddah and Makkah, and reaching the coasts of Jizan and the southwestern highlands.

Consequently, the weather will be rainy and thunderous on Thursday over the city of Jeddah, where the rains are torrential, working on a high level of water and running valleys and reefs, in addition to activity in the speed of the dust-provoking winds during the crossing of thunder clouds

Significant drop in heat on Friday

As the cold air front moves south, a relatively cold air mass rushes behind it on Friday, and temperatures drop significantly in the north, central and west of the Kingdom, as the city of Jeddah records twenty temperatures during the daylight hours from Friday and Saturday.

It is recommended to stay away from valley streams, reefs and torrential streams due to the high risk of their runoff due to thunderstorms.

Attention from the low horizontal visibility due to the formation of temporary dust waves due to the winds accompanying the thunderstorms.

Saudi Arabia | Dust concentrated in the center and east of the Kingdom on Thursday, coinciding with the deepening of the cold air mass in the region's atmosphere