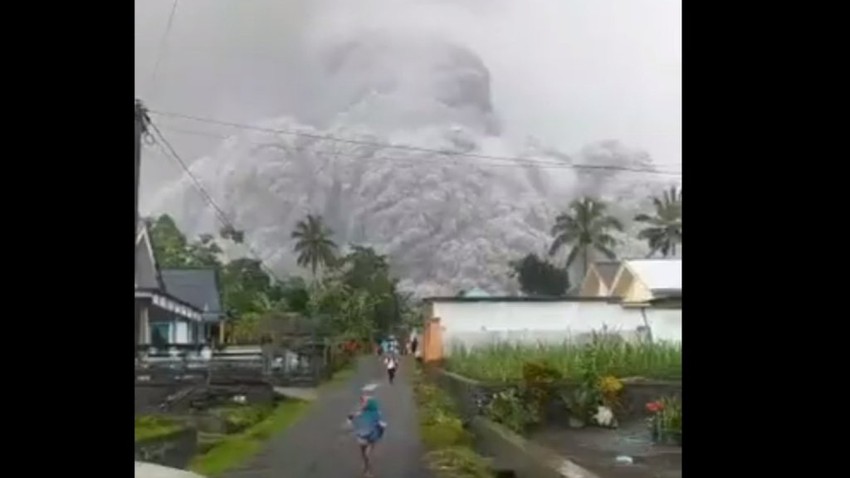 Weather of Arabia - The death toll from Mount Semeru volcano in eastern Java in Indonesia has risen to 13 people, and more than 50 injured so far, and rescuers are still searching in villages covered with molten ash for survivors, after the eruption of the volcano surprised local residents. Yesterday, Saturday (December 4), clouds of smoke and ash rose, sending thousands fleeing the devastation to temporary shelters.

Mount Semeru is the tallest volcano on the Indonesian island of Java, and one of about 130 active volcanoes in Indonesia. The eruption sent thick plumes of ash into the sky, prompting locals to flee in search of safety as volcanic ash covered nearby villages. Residents were forced to evacuate their homes and seek temporary shelter after the explosion.

Dr. Leah Arstini, head of a health center in the area, said that some of the injured who came to the center had suffered serious burns, and some patients were unconscious.

A spokesman for the National Agency for Disaster Management and Mitigation, Abdul-Mahari, said in statements carried by the official "Antara News" news agency, that officials of the local disaster management agency, shortly after the eruption of the volcano, conducted an evacuation operation for the villagers living in the slopes of the volcano. About 10 people were trapped in the surrounding areas of East Java.

It is noteworthy that in the coming days, the region is expected to witness thunderstorms that may hinder efforts to clean up the thick volcanic ash, in conjunction with high temperatures, and the volcanic ash resulting from the eruption will also lead to poor visibility and dangerous health conditions due to the pollutants released by the volcano into the air.