Iraq | A cold air mass brings weather fluctuations and precipitation to the northern regions and snow to the towering peaks, starting from Wednesday 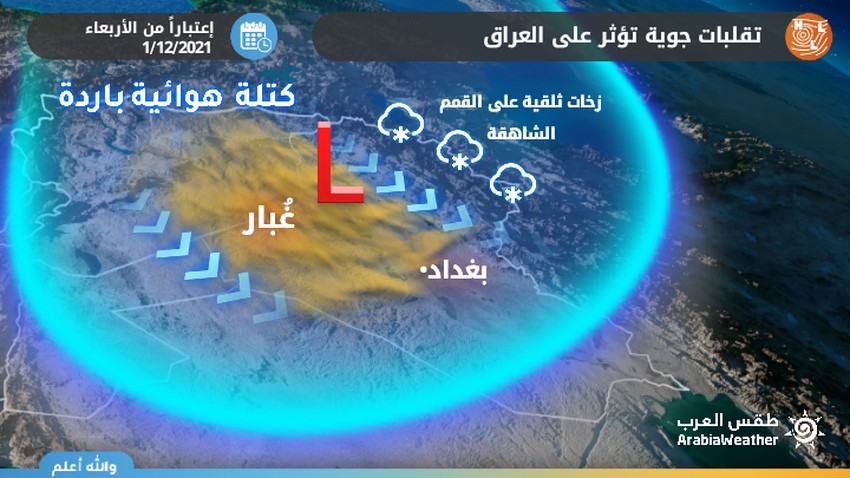 Arab Weather - The latest output of the numerical weather models processed by the Air Operations Department at the Arab Regional Weather Center indicates the approach of a cold air mass associated with an air depression with the first day of winter in meteorology on Wednesday, so there is a decrease in degrees in the western and northern regions, while remaining Temperatures are higher than average for this time of year, and the weather is relatively cold in the northern mountains, cold in the northern and western regions, pleasant to moderate in the rest of the regions, and tends to be hot during the afternoon and afternoon hours, especially in the southern regions.

The country's vulnerability to a cold air mass increased Thursday

The effect of the cold air mass increases, so there is a decrease in degrees in all regions of the country, to be around their rates for this time of the year, and the weather is very cold in the northern mountains with the formation of ice, while it is relatively cold to cold in the rest of the regions, especially in the regions Northern and Western.

Strong winds and heavy dust waves in some areas

It is expected, God willing, that moderate to brisk western winds will blow over the country, accompanied by strong gifts that exceed the 70 km/h barrier sometimes in some areas, especially in the western areas. Wednesday.

The wind speed will also decline on Thursday, but with its activity in large areas of the country, and the winds are westerly moderate to active speed, accompanied by strong gifts that touch the 60 km / hour barrier sometimes in some areas, especially in the western regions, working to raise dust and thick dust, and it is not excluded that It leads to the formation of dust waves.

There is a clear decrease in the night temperatures in the hours of Wednesday/Thursday night compared to the previous nights, and the weather is very cold in the northern mountainous heights with the formation of ice as a result of the temperature dropping to zero degrees Celsius, while it is cold in the rest of the regions at the late night hours, especially in The northern and western regions of it.

Coinciding with a rise in surface moisture levels, freezing fog is forming over the northern peaks.

It is expected, God willing, that clouds will appear at different heights over some areas as of Wednesday, and showers of rain will fall on the northernmost areas, especially in the afternoon. Fog is formed in the northern mountainous heights as a result of the crossing of low clouds touching the surface of the earth.

Clouds will continue to appear at different heights on Thursday over some areas, and showers of rain fall on the far northern and eastern areas in particular.

The frozen fog is formed in the northern mountain heights as a result of the crossing of low clouds and touching the surface of the earth.

Iraq | Warning of a real danger threatening crops due to a new freezing wave, starting from Wednesday/Thursday night

Iraq | A new polar wave, starting from Wednesday, and very heavy snow in the northern regions, and the chance of snow showers extending to the west