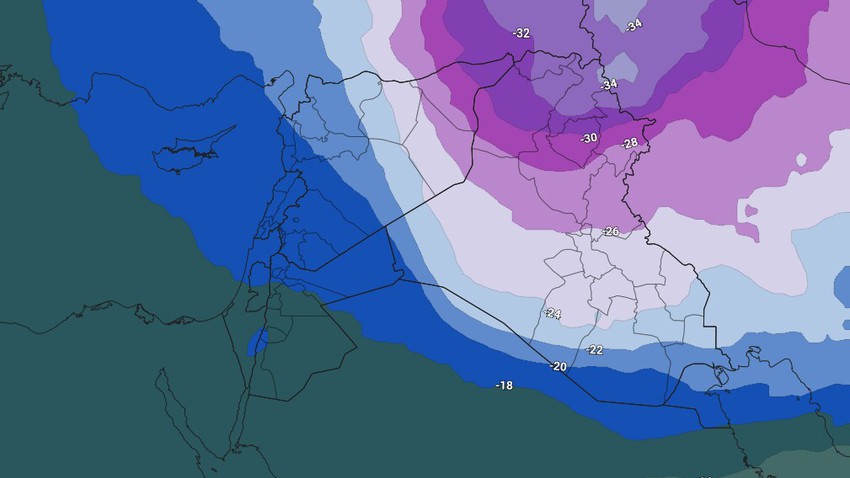 Arab Weather - according to the latest outputs of numerical models, a cold air mass is rushing towards the country of Iraq, coming across Turkish territory, starting from Wednesday and continuing until Friday, and it brings with it many important weather phenomena, including the sharp and accelerating decrease in temperatures from Wednesday to Friday. , It will also work, God willing, to rain in the northern regions, extending sometimes towards some central and southern regions between Wednesday and Friday.

Due to the low temperatures in the different layers of the atmosphere and the availability of precipitation, it is expected that the rains will be in the form of snow over the northern and northeastern mountain highlands, where the snow in those areas is dense, especially during Wednesday and Thursday.

Only 5 ° Celsius, the lowest in the capital, Baghdad, Thursday / Friday night

The air mass is accompanied by a severe and accelerating thermal drop, especially on Thursday and Friday, as it is expected that the lowest temperatures during the night of Thursday / Friday to great levels reach the lowest levels in the capital Baghdad to 5 ° C and be below zero degrees in the northern and northeastern regions amid expectations of frost formation And freeze in those areas.

The expected air mass is the coldest since the start of the season!

With our entry into the rainy season and recently in the astronomical winter, the expected air mass is the coldest since the beginning of the season and the beginning of winter, and the reason is that the air mass maintains its cooling because it has a sub-continental source, that is, it spent most of its passage over land, which contributed to preserving Great coldness.

Iraq | A decrease in temperatures in the western regions on Tuesday, and a decrease in the speed of northwest winds