Iraq | A drop in temperatures in most areas on Thursday will be noticeable in the west and north, coinciding with a state of atmospheric instability 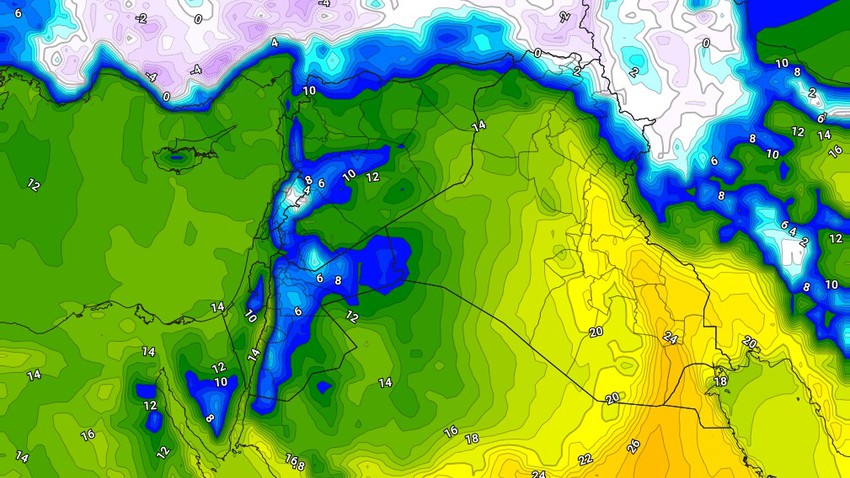 Arab weather - God willing, it is expected that there will be a decrease in temperatures in various regions on Thursday, but they remain higher than their rates for this time of the year, and the decrease will be noticeable in the northern and western regions, and the weather will be relatively cold to cold in the western and northern regions, while it is pleasant in Central regions, and warm in the far southern regions.

Night temperatures drop again on Thursday/Friday night compared to the previous night, and the weather is very cold in the northern highlands, while it is generally cold in the rest of the regions, very cold in the western regions, where temperatures touch zero degrees Celsius in those areas after midnight, coinciding with With high levels of surface humidity and the formation of fog in separate areas of the north of the country.

A state of atmospheric instability, as of Thursday morning

It is expected, God willing, that a state of atmospheric instability will affect during Thursday, as clouds appear at different heights in separate areas, especially the northern ones, and random showers of rain fall concentrated in the northern regions and parts of the southern regions. It may affect the capital, Baghdad, for some time.

It is also not excluded that the rains will be heavy at times in narrow geographic ranges from the far north, and snow showers will fall on the towering northern peaks.

On Thursday, the direction of the wind changes to be northwesterly to northwest over most areas, while it will be southeasterly over the eastern regions. Its intensity is moderate to brisk in general, accompanied by strong flashes sometimes in some areas.